Red Hot Pokers the Stars of my May Garden in Auckland

OK it's Chelsea Flower Showtime again with all it's fabulous gardens. When I lived in London 38 years ago my mother and later my husband took me to Chelsea every year in May where I could drool and dream of having a garden like that. I never thought it was possible to have a garden like the ones I saw at Chelsea in real life but to my delight and surprise in Auckland you can and I have.

I love gardens and gardening but how my Auckland garden  happened is still something of a mystery. I have never spent much time or money on it. I think it is  just 38 years of being in the same place. I have found out what grows over the years and what to avoid. To begin I started noting down what flowered in different months and planted accordingly and in May in Auckland it is Red Hot Pokers. I have lots of Red Hot Pokers. 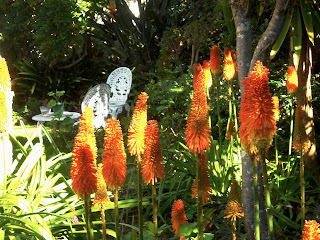 April is my problem month as I have yet to find the Star.  Every month a garden needs a Star that shouts look at me! At the end of April I was in despair. My garden just did not have IT. There had been little rain for the first four months of 2013 and the grass was brown and patchy. My garden looked unloved and then as if by magic it happened

Overnight it seemed the Red Hot Pokers did their thing thing and like mushrooms exploded into bloom. I have but seven plants and suddenly I had over 100 of the gorgeous, sensuous blooms. The colour is bold and brazen. They shout look at me and I do. They last too so this display will give me a good month of enjoyment. They are the May Stars of my tiny garden. 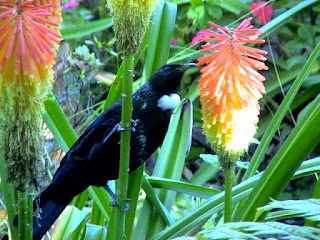 The native birds love them too. For a few weeks I get to see the Tuis or parson birds as they have a clerical white collar. They are nectar drinkers and they perch and swing like acrobats and drink in all they can. I have a loo with a view and I have a most enjoyable time watching them on many occasions! The flowers also attract the native golden eye and I get what passes for a swarm of these tiny birds fluttering around in bliss. 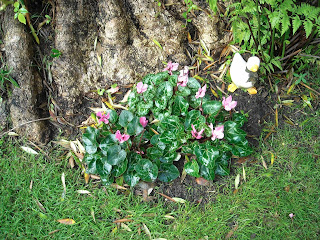 My May garden does have a few jewels too that is less showy flowers but add interest. You have to look for them as they don't scream at you. When in Devon I used to love the wild cyclamen that grew under the trees in spring. To my delight I found I could do this in Auckland in the autumn. They are so pretty as they nestle by a fern frond under the olive. Like Chelsea I too have a gnome, a garden duck that my daughter won and I have not the heart to banish it to oblivion. 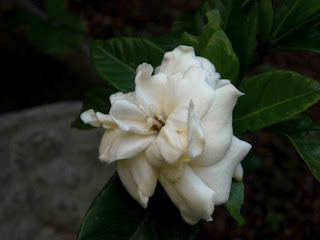 Next gem the Gardenia, these I used to dream off when I saw them in the window of a West End florist. They were imported from France and cost £12 each in 1957 as they were flown in from the South of France. They only last a day but smell of heaven. 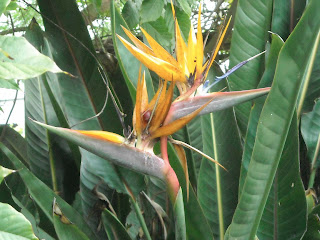 Last gem the Bird of Paradise. This has taken 38 years to achieve maturity. It was the first plant I bought in 1975 because it was exotic and I so wanted one. For the first 8 years it languished. I moved it. It didn't flower in it's current spot either and I despaired of it. After 16 years I gave it a talking to and told it if it didn't flower this year it was out. I must have heard because it did. Now it is truly magnificent. I have planted two more for my daughter. I shall not live long enough but hopefully they will. One has to plant ahead.

My garden in May is gorgeous. Quite up to Chelsea!  Each month for this year I shall feature my garden stars for you to enjoy too. My garden has brought me so much pleasure. It has remained constant and the only thing I have been allowed to persist in doing over a period of time and make mistakes.  I am proud of my garden.

Posted by Janette at 9:46 AM No comments: