Ever heard of Lie Bumps?

Have you ever heard of lie bumps? Until a week a go I hadn't and neither had my doctors. It took me a good Google and Wiki to track them down but they have made the start of 2012 memorable in a nasty unpleasant way.

Lie bumps or Transient lingual papillittis as they a officially known are infected taste buds that are all over your tongue. You probably have experienced that annoying enlarged bobble that suddenly arrives on your tongue and is so annoying that eventually you get your teeth around it and bite it off and indeed this is an old wives's cure not officially sanctioned.

My lie bumps arrived this week on Tuesday night to be exact with a bout of wretching in the middle of the night. Never be ill on a public holiday. The medical system comes to a complete stop. I did go to the all night emergency but at that time there was nothing to see. All changed over the next few days.

It was not until Thursday that I noticed these strange, extremely sore and sensitive lumps on the back of my tongue. By this time my right ear was infected. I saw a female doctor and she was puzzled but I said I had researched on Wiki and I think I knew what they were. If you tried this with a male doctor you would get short shrift! She looked it up and agreed.

They are not dangerous and should go away but I have lots of them, hence the infected ear and worst of all I can hardly eat. The pain is excruciating! The nearest thing I can give as a example is shingels in the mouth. The antibiotics for the ear will not cure the virus based lie bumps and have given me tinnitus as well, sounded like a police siren but fortunately this has stopped.

It seems the lie bumps take 15 days to clear. I shall be a skelington by then!

So not a great start to 2012. Trust me to get something unusual!

Six months later I feel I must write a postscript for anyone reading this and it has surprisingly been one of my most viewed blogs.

Yes lie lumps are harmless but they could indicate something that if allowed to continue could kill you and today many doctors fail to recognize the symptoms namely lie lumps and a sore tongue can be a sign of Vitamin B12 deficiency or Pernicious Anemia. In India B12 deficiency is the first thing a Doctor thinks of.

I had B12 deficiency. I became ill in December 2011 but it took till February 2012  till my GP did a blood test. This test might never have been done. What might have followed is to awful to contemplate and it is it has taken 6 months to sort of recover as it is. It has been most unpleasant.

My suggestion is if you experience lie lumps have a B12 blood test. I cannot harm you and it may save you a life of misery.
Posted by Janette at 12:47 PM 1 comment:

Janette The Woman in a Dressing Gown 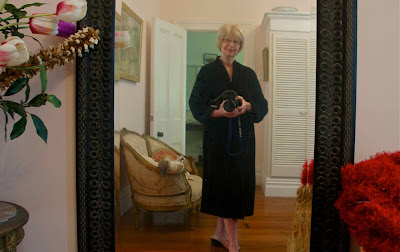 When my friends or strangers knock on my door and I do not expect them they are likely to find me in my dressing gown. They are shocked! It seems to their normal conservative lives that living in a dressing gown qualifies one in the slut category. A woman in a dressing gown is beyond saving.

I have given up trying to explain that professional performing artists live in their dressing gowns. For us it is the norm. Sitting around for hours in cold theaters and film sets with tissues draped over every white collar and cuff to keep the make up off the costumes or getting ready in one's cold dressing room in Bradford a good warm cuddly dressing gown is a tool of the trade.

To me a dressing gown is the real me. I have lived in one nearly all my life. When I go out I put on my going out costume or for normal people my everyday dress but my dressing gown is what I live in all day.

This wasn't always the case. When I was young there was a war and clothing coupons so I did not get a real dressing gown until I went to Aldeburgh, my first job away when I was 15. I was so thrilled but I bought a cotton one which for UK was not warm enough for sitting about in freezing churches at 10 pm and it was too long so it got wet on the muddy paths on the way from the dressing rooms 100 yard away in the rectory. I learned my lesson after that. Since then all my dressing gowns have been short, very warm and when in the theatre a shade of peach so as not to show the powder. Now I favor black!

It was at my ballet school, Arts Educational Schools in London, where the importance of a dressing gown was forcefully drummed into me. The little ballet dancers had to don a housecoat to move from class to class. It was forbidden to appear in ballet practice gear in any other place other than the studio. Our housecoats were very unglamorous, a nasty shade of grey cotton with a tight bright blue web belt that was a torture to wear.

I think my favorite dressing gown time was during the interval between shows in London musicals on Saturdays. For me this was a magical time. Food was shipped in from the Act 1 Scene 1 cafe and I just loved their jam doughnuts. We used to visit each other in the dressing rooms which were warm and cosy with the light bulbs around the mirrors and the delicious smell of make up. We never got fat. One dressing room I was allotted in The Cambridge Theatre was 72 stairs up and the lift wasn't working. On a matinee day I climbed the Post Office Tower twice. When I caught a cold my dresser had to bring my costumes downstairs.

And so began my life in a dressing gown which still lingers to this day. It is so comfortable and I am not going to give it up! So next time you call to see me unannounced do not be surprised to find me in my dressing gown.

Posted by Janette at 7:52 PM No comments:

Labels: Woman in a dressing gown

A New Year has dawned. 2012 has arrived in a blaze of downpours. We have been deluged in Auckland and I believe Christchurch has been hit with yet another earthquake. They happen so frequently these days that everyone is rather blaze about them. 'Oh yes, only 5.9 nothing to get excited about'.

2011 was so wonderful that the thought of 2012 scares me a bit. Being of a mature age  every day is now a gift so I have to use my time wisely. I have decided to start a separate blog Janette Miller's Strange Life where I am going to write about some of the strange events that have colored my life. I did not ask for any of this. I should have preferred a more normal existence but it was not to be.

The reason I am writing this is mainly for my grand daughter who I shall never really get to know. I want her to at least know a bit about the real me. In my blogs I am franker than I am in real life as I do hold what many many consider extreme positions on some subjects that socially should never be mentioned and in real life I don't but in my Strange Life Blog I shall. I am too old now to worry about  being cut off Christmas Card lists.

Doing it this way makes me do it but this blog is not going to be my major project for 2012. My DVD of Schubert's 'Die Winterreise' is Project numero uno! I have recorded the 24 Songs again. I did them in a sound studio just before my husband Miles died and you can see his appreciation here . But we did it in two one hour sessions and on the latter Miles was very ill so the 24 songs were by no means perfect. Neither of us were at our best. His last comments on leaving the studio were that 'Someone could put the wrong bits right' and ten years later much to his surprise I can. I am doing the cycle as my own personal Winter Journey. Traditionalists can ignore it but Schubert Songs are so approachable they can be reinterpreted ad infinitum.

For relief I am going to make a food DVD with the help of the artistry of my local butcher. He is a real butcher and I like real food. The way my butcher butchers a  lamb carcass in ten  minutes is sheer magic and like bookbinding a dying craft.

Of course there is my garden to consider. It is so easy to manage  as it looks after itself but I am going to go for more lilies and gladdies next year so I have to plan ahead.

Then there is my novel, yes I have written one of those and my short stories that I intend to self publish this year. The novel is teamed with a CD, a chapter a song and I still have to do some work on that to make it fit.

With all those projects I shall be kept busy for a year and I don't expect to finish them all but it is important at my age to have a project on the go. In my experience them without projects die!

Lastly I intend to take two short holidays one in Rotorua to film some mud pools and if I have time I have a go at upgrading my web site as it looks awful on Google Chrome and I dread to think what it looks like on an iPad. but I have to upgrade my Adobe Suite and that is expensive and may have to be put off. It also will take months as Web designing is challenging.

But you never know with life! At my age I may not be here. Will I live to see the Olympic Games in London? Oh I do hope so. I am going to give it my best shot.

Posted by Janette at 4:13 PM No comments: