Today on Facebook I heard of the death of Kurt Masur. He worked in New York for the New York Philharmonic Orchestra but I had never heard of him. My omission. The famous singer who had alerted me to his death had written these words which immediately struck a chord.

You screamed at me in front of a full dress rehearsal audience (to be fair, I screamed back at you..), you grabbed my arm during a performance, you flat out fired me, and you made me madder than hell sometimes.

..and I have learned so very much from having had the privilege of working with you.
RIP Maestro.

This was my first introduction to this famous man and the above singer was obviously not alone for then followed a list of singers that he had yelled at, one was as young as 12!

He yelled at me too...guess I'm in good company!

It was always out of the want of perfection for the music. Not generally to be a jerk... We know who those guys are.

A great conductor, and it now seems yelled at the wrong people now and then. He I suppose is forgivable. He made a great career, if only by reviving the NYPhil.

He yelled at Daisy Eagan, and she was 12! Still, he made some amazing music and lived an important life. Rip.

This was the first thing these singers remembered about this conductor not that he was a brilliant musician but that he had yelled and humiliated them in public. In this position it is impossible for an artist to yell back. It is sad to think that this conductor will be remembered in this way and I feel sure when he yelled at, as it appears quite a number of artists he never gave a thought that one day his yelling would be made public.

Conductors, directors and choreographers did this in his day. They considered themselves Gods and above reproach. How many careers have they ruined? Being yelled at in public is totally devastating and many lose confidence as a result from which they never recover.

My Bete Noire was the choreographer David Lichine who had been one of Diaghilev's young men and was employed for the first Nutcracker by London's Festival Ballet. As a choreographer he was a success and in fact I have never seen a finer version but as a person he was cruel and horrible so horrible that when a book was written to celebrate this production it was even mentioned that many of the children thought Uncle David was too hard on them! Understatement he was Mr. Lichine, we curtsied to him, we curtsied to everyone and he was a tyrant.

He dismissed dancers without a thought. I only got my part because three others before me were summarily dismissed. If we put a foot wrong we were out. To begin I managed but it all went wrong for me when I discovered just how thoughtless  and cruel this man could be. 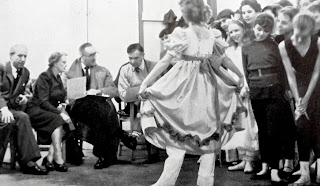 It was at the dress parade and the press had been invited for publicity. The wardrobe at our school had only managed to make 3 costumes. The designs were by Benois and my design was ghastly. A huge green and white spotted monstrosity with a heavy Broderie Anglaise collar. It was hideous. Lichine didn't like it either and as I stood there he started to scream at everyone. I was terrified. I was only 14 and had know idea what was happening. You can see the offending dress in the right corner.

Then Lichine walked up to me and in front of the cast management and press ripped the dress to shreds with me in it. By the time he had finished I was virtually naked and clutching the remains to cover my modesty. Pre pubescent girls with no bras are very touchy. Yes it wasn't my fault and the dress was horrible but this I realised later was his way of getting the dress remade and it was remade by my mother on dress rehearsal day but this was another story.

However at a photo call that afternoon I still had to wear the dress as there were no others and they needed three. The poor photographer had to disguise that my dress was in shreds and the photos are very awkwardly posed. My face just pokes into one. From that moment the man scared me as I knew then he had no feeling for anyone. Just himself. 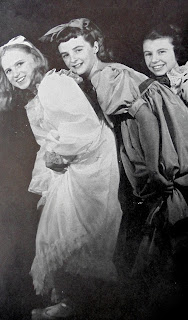 All remained well for me until the public dress rehearsal with Princess Margaret in front. In the middle of the prologue for Act II, Kingdom of Sweets, I got my second public humiliation and I could do nothing about it. We all had to lick an enormous lollipop. I was dead centre, kneeling down with my back to the audience, I had to lick the lollipop and turn around and smile. This was fine in rehearsal room as it was flat and where ever the prop landed  I could turn around and smile and even on the run throughs there was just enough room for me on the stage to do this.

At the Royal Festival Hall we had no footlights. There was just a white line to show the edge of the stage and one had to be careful as there was a long drop onto the orchestra. On this dress rehearsal everyone was nervous and somehow the lollipop was place too far downstage and there was not room for me. I was dangerously near being pushed over onto the orchestra. I was scared stiff and I failed to look around when I should.

Lichene yelled at me! Turn around girl, I want to see your face! The whole audience gasped as at ballets one hardly expects such a vocal performance. I was clinging on for life and the orchestra pit was dangerously close so I could not oblige although I felt like standing up and screaming at him so I got a second blast. By this time the music had moved on and I scrambled to safety but I felt awful. I had been screamed at in public. It was humiliating.

If this had happened in rehearsal I should have been out and in fact I think he wanted me out but my mother had made my costume and was busy helping with the other wardrobe disaster that had occurred and while I might not have been missed my mother would have been missed. Needless to say I just wanted the floor to open up and swallow me and really I lost my performance confidence that night.

A few days later this man arrived in our dressing room to autograph our programmes. We all lined up. He never said a word or looked at anyone till it got to me and then he did. He started to sign and then he looked at me and gave me a look of exasperation. He was going to say something like You ruined my Nutcracker by not turning around  but he thought better of it. Obviously I had made some sort of impression, I do this, and I feel sure he remembered me but why did he do it?

Why did the man pick on me? Why did he chose to belittle me in front of a whole audience. It was such a tiny point. Did he want me to fall into the orchestra pit? I was doing my best.

Artists never forget these types of reprimands and it appears many have not forgotten Maestro Kurt Masur outbursts.  I don't think any of us really forgive either. We don't make  errors deliberately. Things go wrong that are beyond our control. We do not deserve to be screamed at in public.

I feel sure Masur and Lichine would be surprised that their outbursts of bullying would be remembered so many years later and form part of their legacy. They both deserve it.

Posted by Janette at 1:04 PM No comments: