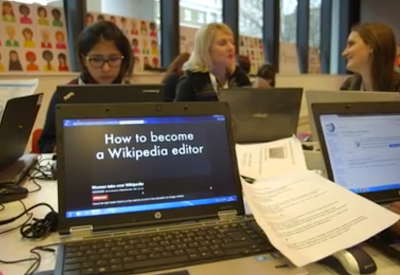 "It is one of the worlds most popular websites. A source of information on  many things but there is one area where Wikipedia - the online encyclopaedia - is severely lacking. This is articles about and by women. This is something the organisation is trying to tackle and today they have teamed up with the 100 women season to do something about it. Nuala MacGovern has spent the day at a very special event." BBC World Service Radio

Women through the centuries have been airbrushed out of history and it is still happening today. Sadly only 17% of Wikipedia's articles are about women and only 15% are edited by women and today the BBC set out to reverse this. I am one of the 15%. I am fortunate I can edit because I have a coding background as I used Dreamweaver and now Adobe Muse but that was in the early days when one could have a go.

Technically it is supposed to be easier in 2016 using Visual Editor and I had a try. I still do not find it any easier and I am good with computers. The video training is not up to lynda.com standard

Today all Wiki articles need published references and for many amazing  women these are hard to come by. I should love to have my own Wiki page but sadly I have no one who will take the time and effort to put it up for me and being a woman I don't cheat and put it up for myself. You are not supposed to put up Wiki pages about yourself so how do all these men get one? So I have done the next best thing I have put a Wiki style bio on my blog and that will have to do until one day someone does it for me. I can supply refs and citations for everything and all can be checked but it will take hours.

Once I did get an offer but sadly it never materialised. May be if I send him this and ask nicely he may relent and upload it for me.

I have been lucky. I have really solid references because being an artist I get written about in newspapers but thanks to the fact that I can edit Wiki I got the most respectable reference one could have on an International DVD,  and it is such a strange tale it is worth telling.

I use Wiki a lot and I was researching a one of Britain's foremost documentary producers Tony Palmer. Palmer has a list of productions and awards that take one's breath away. It was all there on his Wiki Page but no references or citations. In the early days these were not essential. Palmer does not need references as everyone knows who he is but there on the page was a huge warning saying that unless references were supplied and proof that Palmer was notable and worthy of inclusion on Wiki this page would be taken down within days.

I did not know Palmer. I live in New Zealand but I thought this was so unfair and I wondered if Palmer knew. I felt I had to warn him because it was so unjust. With great difficulty I found his email and got in touch with him and he rang me up to say thank you. As one is not allowed to put up one's own page or edit it he was stuck. He had no idea where the page had come from but obviously did not want it taken down.  Timidly I asked would he like me to try and see if I could put up a few refs. I had no idea how to do this but I could have a go.

Somehow I managed it. It was not easy and I only managed one or two. I also had to deal with an editor who obviously had a grudge against Palmer which was not pleasant. You can see it. Only three refs.It was enough and the page is still there! Really everything else on the page was enough but rules is rules, as they say but today Wiki wants citations for nearly every word.

Palmer was so grateful. He only knew me as an unknown woman from Auckland NZ. I remember he rang and said "Thank you, thank you, thank you!" He said he was going to send me some of his DVDs as a present. He did. He knew I liked opera and ballet. Imagine my surprise when I found myself in one of them on Benjamin Britten. I knew Britten well and so did Palmer. In fact I think Tony Palmer knew Britten as well as anyone. His Britten DVD of Death in Venice is definitive.

Years later in 2013 Tony Palmer featured me in his centenary film on Britten. I felt so honoured. If it had not been for my edit on Wiki we should never have known each other. I also got to feature in The London Times and asked to contribute to The Britten's Centenary Collection, my essay just after that of Alan Bennett! It was edited by Hannah Nepal.

I still await a Wiki page. I think I deserve one even for being  Auckland's Plunket Woman of the Year 1981/2 for services to the Arts. ref NZ Herald Now that is an honour but like most women I won't get one which is a pity. It is because of the fight that I and my sisters put up that women are better off now than they were in my day. Not equal yet but getting there. Wiki should change its  policy and let people like me post a Page with as many refs as possible that can be verified to encourage other young women to have a go.