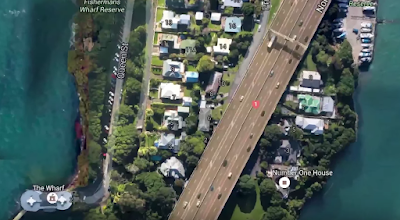 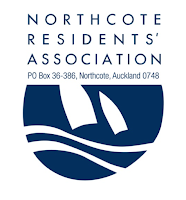 Northcote Residents have withdrawn their Environment Court appeal against SkyPath, which they consider to be a financial, functional and environmental failure. They also consider that SkyPath is unlikely to ever be implemented and that its blatantly obvious safety hazards alone, should have prevented it from seeing the light of day in the first place.

Although Council tells itself that SkyPath is merely a $33M project, its real costs are set to deliver yet another Council blowout, this time set to amount to hundreds of millions. In turn, Auckland’s ratepayers are now unwittingly set to pay for that blowout, via Council’s underwrite for SkyPath. To approve the underwrite, Council acted illegally and violated its statutory obligations, in the emphatic opinion of a legal specialist in the area of government regulation, Dr. Grant Hewison.


SkyPath is funded via a PPP arrangement. Every failed PPP arrangement world wide, exactly replicates Council’s PPP arrangement for SkyPath namely - SkyPath’s claimed patronage is pumped through the roof, patronage shortfalls are underwritten by Council and the funders interest charges are about double the rate at which the underwriter (Council) could borrow finance. The PPP funder must be delighted. SkyPath can lose as much money as it likes, while the PPP funder gains its full interest charges, management charges and debt repayment. A picture-perfect PPP plunder (PPPPPP).

That goes some way to explaining why some Auckland ratepayers such as Northcote Point residents, faced rate increases this year that were 60 times the rate of the country’s residual inflation rate. We’d be better off living in a banana republic, than continuing to rely upon this Council’s fiscal literacy.
Council has aggressively supported the development’s comprehensive violation of its own regulations regarding zoning, parking, amenity, pathway design, emergency egress, emergency management and public safety. The extent to which SkyPath violates those regulations would be a joke, were the consequences not as grim as they are. Violations of public safety provisions alone, are certain to cause many serious injuries and worse. Aggressively promoting a patently hazardous facility is not quite in line with delivering “one of the World’s most liveable cities”. Particularly if SkyPath turns some living customers into half-dead customers or worse.

SkyPath’s is primarily a commercial tourism and leisure facility, since that’s what 87.5% of its customers are projected to be. Council’s regulations sensibly do not permit any large-scaled commercial developments in residential areas such as Northcote Point, yet that is where Council wishes to locate SkyPath’s North Shore landing. Council claims that SkyPath’s patronage, will “conservatively” amount to 13,000 - 20,000 visitors at the end of Northcote’s cul-de-sac peninsula suburb, every summer weekend day. Eden Park’s averaged attendance ranges from 13,000 - 18,000, depending on what is happening in any given year. The effects of these perpetually huge crowds are “not more than minor”, say Council’s and the Applicant’s so-called “experts”.

The Northcote Residents Association (NRA) withdrew from its appeal under severe duress. The Council-funded and underwritten Applicant, threatened to claim costs against it “to the maximum extent possible”, in the event that NRA lost the appeal. Those costs would likely amount to many millions - the amount both Government and Auckland Council have provided in support of this purportedly private commercial development. The developer has previously claimed it doesn’t have enough money to pay for postage, but that has not stopped it from threatening rightly concerned residents with multi-million dollar claims of costs that Auckland Council has already fully underwritten.


Nobody yet knows if SkyPath’s implementation will ever be possible. That is so, because before SkyPath can be implemented, it needs NZTA’s approval. If that approval is ever granted, that can’t happen for another year according to NZTA. For obvious common-sense reasons and for reasons we are advised are duly backed by case law, resource consent hearings are not supposed to start until such basics have been resolved. They are not, yet the appeal hearing is proceeding regardless.

Another issue that calls SkyPath’s viability into doubt, arises from recent discussions with the New Zealand Transport Agency (NZTA). Information provided by NZTA states the Auckland Harbour Bridge “will allow for ....walking and cycling facilities” and, “four lanes on the existing Bridge, will become redundant” when the next Harbour crossing is installed and that, “the Bridge’s box girders need strengthening to accommodate SkyPath” and that “further strengthening of the Bridge’s box girders is not physically possible, except at connection points”.

The SkyPath function could occupy less than two of the four redundant lanes freed up when the next Harbour crossing is implemented, without adding additional stresses to the Bridge and without decreasing its usable life, as SkyPath will. That could be achieved at virtually no cost and far better than SkyPath, since cyclists and pedestrians would be safely separated and would access the facility without causing any neighbourhood any detriment. SkyPath’s genuinely huge costs, amenity detriment and safety hazards are wholly unnecessary, since the Next Harbour Crossing solves all the problems SkyPath does not, never could and never will.

Since NRA’s supporters have always supported the idea of walking and cycling from one side of the harbour to the other, we say, “bring on the Next Harbour Crossing so we can all enjoy cycling or walking across the Harbour Bridge, but in a way that works functionally, financially and environmentally”.

Too logical? Too workable? Too environmentally friendly? Too cost effective? Apparently. Maybe the consenting authorities need a pile of serious injuries to awaken them to the responsibilities they are paid for, even if they don’t care less about SkyPath’s fundamental and glaringly obvious environmental, cost, funding and design problems.

Posted by Janette at 8:39 AM No comments: 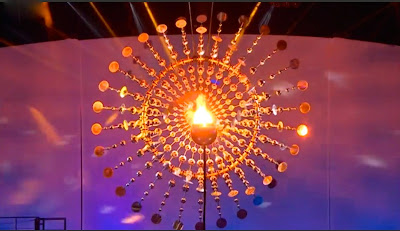 Let's face it. The Rio Opening Ceremony was wonderful. It made Beijing look vulgar and London second rate bourgeois by being classy, creative and coming in at one twelfth of the price that London paid for the expensive over produced, embarrassing hotchpotch that began the 2012 Games. When you don't have enough money to splash out the best idea is to feature it and Rio did, brilliantly.
Rio is famous for its carnival but some of the teams mistook it for a funeral. Pity the teams did not go for more colourful uniforms for a South American country. Worst designed were the Swedish yellow satin efforts. Had I been a Swedish woman I would have refused to wear it. Germany's uniform was grey and depressing and even UK could have done with a bit of colour.

Could have done without the speeches. These should be cut to 2 minutes each at the most and only two.

Personally I still prefer the UK 1948 Wembley style of Opening Ceremony. Play National Anthem. athletes march on, pigeons, balloons, light flame and start Games.  I was there for that one and really none has come up to it since.

So well done Rio! Now for the fun. 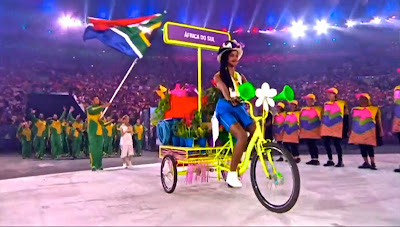 Posted by Janette at 5:38 PM No comments:

New Zealander Kevin Roberts, chairman of the prestigious New York advertising agency has been forced to retire after making extremely 'offensive' comments about the lack of women executives ambition.

This did not really surprise me because ever since I arrived in Auckland, New Zealand in 1975 I had met with this attitude from the local advertising agents. At the time I was doing pioneering work in opera and ballet trying to drag the traditionalist opera and ballet companies into the late 20 century by using film and transparencies in my productions. By the early 1980s I was video taping these and the results  showed, even though I had virtually no equipment because owing to trade restrictions I was unable to import the cameras and projectors I needed, that it would have been obvious to all I was extremely talented. Even the Royal Ballet Covent Garden knew I was something special in the area and allowed me to use their artists.

I was also a brilliant marketer and won the New Zealand TV Marketing Award in 1982 for my exceptional marketing of children's ballet and serious opera and ballet productions. I came in after Rugby and Cricket so I was good but I met with a brick wall from the local advertising agencies. One effort to woo one of the main operators Bob Harvey, who later went on to become Mayor of the West of Auckland convinced me my chances of being gainfully employed was nil. Why? Because those in power in the advertising industry even if they did not hate women although many did, just did not see them as employable or creative.  I was just dismissed. What a mistake!

But in Cindy Gallop and articulate women like her, Kevin Roberts has met his match. On BBC World this morning Cindy Gallop gave and interview of such clarity and substance that must have shattered Mr. Roberts confidence. Cindy Gallop spelled it out to him and the male advertising executives in words of one syllable that even they could understand that the male attitude to women today is just plain wrong. I am full of admiration for Cindy Gallop because I was unable to do this in Auckland and still today Auckland finds me uncomfortable because I am a woman. Sadly I cannot find a podcast of this exceptional women to link to. Maybe her comments are too uncomfortable for the BBC too. She is a lesson in how to give a BBC interview.

We need more Cindy Gallops to speak out and confront these selfish and biased white male executives in all areas who dismiss women's opinions just because they are women. Young men these days are guilty of misogyny as well. Young males can be just as devastatingly rude and vicious to women as any Kevin Roberts because they are trained to do so by their male elders. In fact some of them are worse, as being unmarried themselves, many are unlikely to have children, they see their career paths as a straight line to the top as any female competition will be removed and dismissed on the way.

So was I good enough to compete with the boys? Well the video below was edited on video tape in 1985. It still looks good today. Think what I could have achieved.

I count myself lucky that women in future will no longer have to put up with this rot and will stand up say so and get the man removed fast. I do hope Kevin Roberts stays in the USA and does not return to NZ. Women in NZ can do without men like him. Well done Cindy!

Posted by Janette at 9:25 AM No comments: