Carnet de Bal - the perfume of my past. Janette Miller 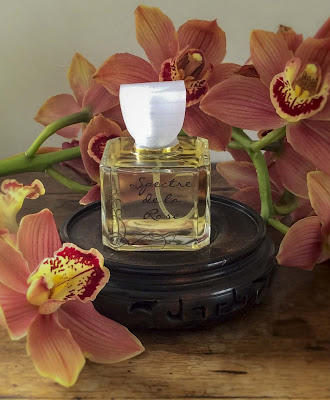 with a little help from Scentmatchers

Carnet de Bal is a classic fragrance that was created by Maurice Shaller in 1937. It opens with citrus and fruit notes along with chamomile. The heart is floral with rose, jasmine, ylang-ylang, lily and cyclamen, laid on a base of patchouli, oak moss, amber, vanilla and musk.

If I had to choose just one perfume it would be Carnet de Bal. Its beautiful bottle and gorgeous, thick brandy coloured contents graced our cold, tiny black and white bathroom in Stanmore just after The Second World War and continued to grace our pink bathroom in Pinner in 1964 for although the contents had long gone my mother and I could not bring ourselves to throw the glass bottle away. 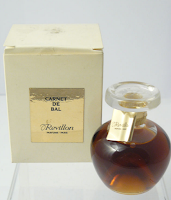 My mother had been given the precious bottle in about 1939. It had already been opened but my mother was not a great perfume user and so it languished for years with the contents getting thicker and thicker until  I got at it, in the early 1950's it was like treacle. My grandmother had loved Yardley's English Lavender and for everyday summer wear this is a delightful  perfume as it has that hit of lavender with a sharp touch of zing that is missing from cheaper varieties, but Carnet de Bal has class. It is the perfume of desire and seduction and I loved the intoxicating smell of lust even then.

I loved holding the sensual bottle and sniffing its contents. I was not allowed to wear it as it was so overpowering but I was allowed to sniff. I can remember it glorious smell to this day. Over the years the bottle emptied until the perfume  became a lost dream. It must have been in 1960's when it gave up the ghost and ever since I have been trying to recapture or buy a similar aroma but to no avail. It is the hit of orange and citrus that gets me. and as you can see from the description above written today that my nose was absolutely bang on. The perfumiers Revillon went out of business and so it was adieu to Carnet de Bal.

Then in 2015 along comes the internet. In a moment of indecision I played with perfumes on Google and I found Carnet de bal. Perfumes have become antique collectables. Sadly the bottle above was sold in 2008 for a hefty sum. The brandy glass shaped bottle is designed to stand upside down on its stopper.  As I Googled down the page I came across Scentmatchers.com. I had never heard of such a thing but it seems that this group of talented perfumers can recreate all the discontinued fragrances of the past. 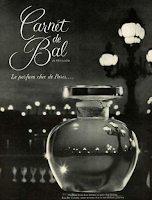 You see it appears that you cannot copyright a scent, aroma or smell. The only thing the expensive perfumiers can sell which is copyrighted is the name. You pay for the name and anyone on earth can recreate the smell. This firm has thousands of perfumes recipes  and can recreate any fragrance you like and then you give it your name. It is not cheap but not that expensive either. I hesitated for a year and then I found them again. I rang them up and they answered, I thought what the heck and put in an order for not one but two bottles of Spectre de las Rose, my name, which I hoped would remind me of the happy hours I spent in the bathroom inside the airing cupboard cuddling the water heater because it was the only way to keep warm as coal was rationed with the heady smell of oranges and musk. Oranges too were unheard of and as children we got a delicious squash that came in a small bottle.

I told them I could remember the smell, even after 60 years. It is hard to believe but I remember smells, the smell of Covent Garden underground as I went to the ballet. was unmistakable, the smell of oranges and urine with a touch of cabbage, the smell of freesias touched with rain and the smell of coffee brewing on the hob.

Today the package from the USA arrived. Two beautiful glass bottles, in two black satin pouches, perfume hates the light, then the first spray and to my delight the wondrous smell of my youth hit my nostrils. It was being eight to eighteen all over again. I cannot thank the team at Scentmatchers enough for making my day. I have the fragrance again.

It is an enchanting perfume and I am so pleased it has not been lost. So if you have a yearning for a perfume of yesteryear give Scentmatchers a go. They might make your day too. 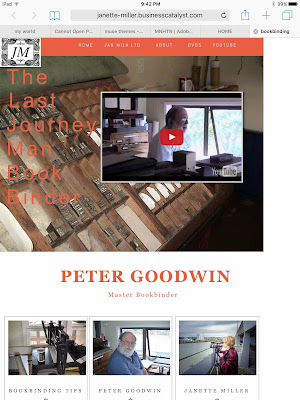 Adobe Muse users - Site won't load in Tablet design on an iPad? Won't scroll? If it does, it is jerky and sticks  or freezes? Screen white down the side? Desktop and phone version working perfectly? At wits end trying to get the bloody thing to work?

Yet if you click and hold refresh button on the iPad Safari browser and choose Request Desktop Site the tablet site pops up and works perfectly with scrolls and all the whistles and bells? Sometimes Safari does go to the real Desktop site and you will see your actual Desktop working perfectly if a bit small.

I have had this problem for about a week, being a Saturday and Sunday did not help as Adobe and Muse support unavailable so I had to play about for hours to work out what was happening. I was almost going to jettison the Tablet version and just go with Desktop and Phone as the net browsers  choose the smaller Phone version if given the choice. Not the best answer for me because the best phone versions are pretty, simplified lists.

Eventually after  hours of chat to Adobe and a wait for a call back that failed to materialize I got an Adobe expert in India who knew how to solve the problem and it is simple.

Adobe has an issue with uploading Tablet version to the iPad at the moment. The problem is all scroll effects and third party widgets that use these. They stop or interfere with the loading and make it jerky, wrong screen size and make the iPad impossible to use. One has to have a set screen size not 100%.

At the moment it is to remove all scroll effects and third party widgets that use them from the Tablet and a set width size.

For me that meant virtually a new design.

Naturally I am pleased that now my site loads and scrolls like velvet, albeit in a very boring form.

Adobe you know this! Please put up a notice  that we can find easily when we Google the issue,  to tell your users the solution instead of us all having to reinvent the wheel. Time for most costs money. I have the luxury of being semi-retired but I am reaching the end of my sell-buy date so time for me is precious and I do want my site up.

Hopefully Adobe will solve this issue soon and issue an update. Please Adobe make it as good as Request Desktop Site upload so I can have a website worthy of what Muse can do and I can make my Dancing Angel fly again. Well scroll down and land on letter W!

Love Muse. It is just so clever and creative. 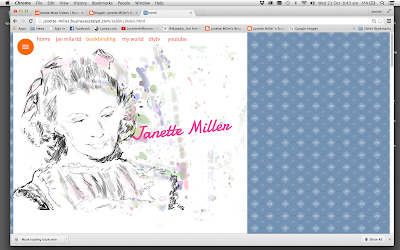 My site  new site should be available in a few days at janette-miller.com but sadly minus all scroll effects. However I do have a very cool versa slide from Muse Themes that works  a treat. Both Adobe and Muse Themes are great by the way and this is by no means a complaint but a suggestion in a kind and loving way!
Posted by Janette at 9:10 AM No comments: 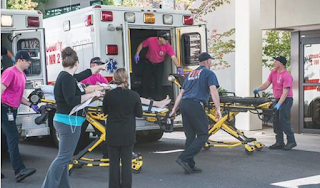