The Eton Reading List - Why didn't I get this at Rosary Priory? 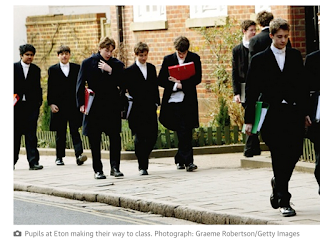 I wish I had been given reading list like this when I was sixteen. It costs nothing and would have been so helpful. Culture is learned and shared so it would be good if everybody was, if not in the same loop, had least a taste of what the loop is. Every school could hand out such a list and let the pupils get on with it.
I had disastrous education. A true faith school run by Irish RC nuns. How I survived is a mystery so a reading list would have been a starting point. That is the difference between my faith school and Eton, I got belief systems so no science or sex education and a list of prohibited books and they get the chance of balanced education whether the children take it or not. They know it exists and where to find it.
This is what Eton does. It teaches conduct and confidence and it does it well. Eton teaches you to get on with people and remember your friends. They have a shared common knowledge. You can help them and they can help you and it works.
The Royal Academy of Dramatic Art does the same. Remember your colleagues all through your career. Mine the GSM&D did not! This was a mistake because all of us went our separate ways while those from RADA helped each other to get on.
So culture is learned and shared. Eton knows it and the rest of us don't. Knowing their shared reading list at least gives us some insight as to where they are coming from and honestly it is a good list. To be that well read at 16 is an advantage and yet anyone with a will and a list could do this. If I had had that list I should have used it then and I shall use it now.
Great list, some I have missed like Sophie's World.

PS My father Major James Charles Hugh Miller knew all about a good education having gone to the very best schools himself. Had I been a boy I should have had his type of education and in fact just down the road from me was one of the best independent girls schools in London, The North London Collegiate and yet he sent his daughter to be educated by Roman Catholic  18 year old Irish nuns! I rest my case for independent reading lists!

PS: Missed out Proust! I should add this.

Posted by Janette at 7:44 AM No comments:

Algebra the minus x minus = plus problem of my life 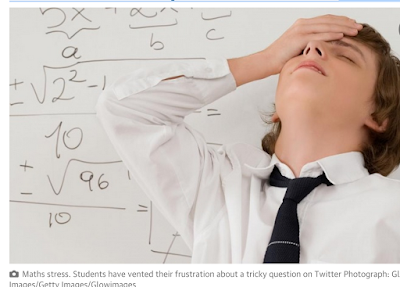 A challenging GCSE maths question has left students so confused and angry that they are calling on the exam board to lower its grade boundaries.

The conundrum, set by Edexcel, involves a girl called Hannah, her bag of sweets and a perplexing equation:

Algebra! I never got it at school so I had a go at it when I was 26.   It annoyed me to think I could not do it so I got out my father's Halls Algebra part one and worked my way through it. At the time I was very impressive with long division using algebra!

The problem I have with algebra is why a minus x minus become a plus? Who worked that one out?.

I know there is a very rational answer but when you are 12 and can think visually this is a problem. Telling someone like me that  it is when I can see it isn't doesn't give a child much confidence in the system.

Let me see if I can explain why multiplying two minuses make a plus. It goes something like this.

The only way to do algebra is to stick to the rules and the rules are difficult to remember if you are not using it every day or are under pressure. I was good at it and if necessary  could get out my Hall's Algebra part 1 & 2 and be up and running in a couple of days but honestly I have never used it again in my life. Same for trigonometry as I do not fire guns.

I don't think it is fair to ask exam students to have to do this unless trained to do it or given lots of time to think.

If I were taking exams today and I didn't think a question was fair I think instead of trying to do it and making  mess I should write out what was wrong with it. I recall my grandfather did this in 1904 in the Civil Service exam. He pointed out why  the sum couldn't be done, It couldn't be done! He ended up eventually running Wembley Stadium. He came from the slums of Royston.

Sorry for rant but algebra bring out the worst in me.

Posted by Janette at 3:02 PM No comments:

Labels: Algebra, minus x minus = plud

Christine Goerke, Diva, in NZ for Wagner Gala with NZSO 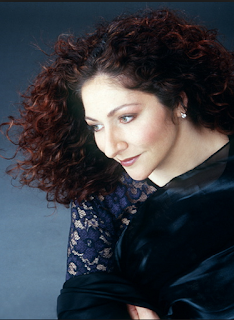 New Zealand is privileged to welcome the current Wagner/R Strauss opera diva, Christine Goerke to it's shores. Last heard she was winging her way here from New York by Air New Zealand. At least she knows where it is because she has been here before which is more than can be said for some of her countrymen who suggested that she hug a Koala while here! For those in USA who are geographically challenged New Zealand is a sovereign country and the couple of large Islands shaped like a boot a thousand miles East of Australia which does have Koala bears.  I must admit our flags are confusing. Only one star difference.

It is true that New Zealand is at the end of the world. It is the place where artists visit either at the very beginning of their careers, as I did when I desperately wanted to direct serious opera and ballet and because I was a woman nobody else in the world would let me, or at the end. We see a lot of artists here when they should have given up so it is refreshing  for us to have an artist  at the pinnacle of her career honour us for a very, very special Wagner Gala with the New Zealand Symphony Orchestra where she will be singing highlights from Siegfried and Gotterdammerung.

Now I must warn  that on the whole New Zealand isn't into Wagner mainly because our opera companies rarely present it. The odd Dutchman  because of Donald McIntyre, a truly great Wotan and one Meistersinger in the 40 years I have lived here. When I once included King Mark's monologue from Tristan & Isolde  in a concert I was forced to cut it  the following performance as the audience really got restless. The abused King nearly chucked me in Lake Pupuke and I really didn't blame him because he  did it well.  It wasn't him or Wagner it is just that at that time the NZ audience had never seen a Wagner Opera. Even Tristan today would be shunned.

NZ loves La Boheme and for ballet Coppelia. When it came to funding The Sound of Music got the full Arts Council funding and our Fidelio with a mise en scene by fine artist Tony Fomison nothing! His oil paintings which I paid for, as the Art's Council reneged, are now hanging in the Auckland City Art Gallery and the director's room in the BNZ. They won't give them back!

So New Zealand is so lucky to hear Ms Goerke sing the major sections from Wagner's masterpieces first. We heard her Brunhilda first. New York is still waiting although Canada Opera and Houston Texas have had the experience.

NZ is only getting a concert version but what a concert version. Truly the very best bits. Wagner wrote The Ring over a very long period of time. He started with the book of the last of the four operas, Gotterdammerung, but then he felt he should write a prequel Siegfried and then another opera to explain that, Die Valkyrie and lastly a preliminary evening Das Rheingold.  His style of writing changed during this period. Gotterdammerung is written in the old opera style with arias and duets as he progressed this altered so his first opera libretto is quite advanced.

Wagner then wrote the music for the first two operas and the first two acts of Siegfreid and then he stopped. He wrote Meistersinger because he needed a crowd pleaser for money and then he had that eureka moment with the chords of Tristan and Isolde and Western classical music was never the same again.

For serious Wagnerians, and my husband Miles was one of these, Act III Siegfried was the moment The Ring began. It is full of the most sumptuous sounds and from then on magnificent. It will be some sing too for the soprano because in the opera house she never has to sing Siegfried and Gotterdammerung on the same night and indeed it is a bit of an ask.

It is such a special occasion that I am actually going to go! I have a compromised immune system and it is not wise for me to attend large enclosed gatherings as if I catch a cold I end up in hospital but this is an exception. Nothing is going to stop me and I would like to encourage anyone who loves opera to go too. This is your opportunity. Don't miss it. You will regret it.

Make a note in diary Friday 19 June 2015, Town Hall Auckland for the musical experience of a lifetime. 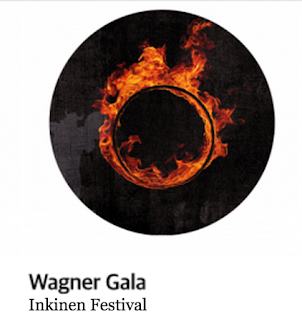 Posted by Janette at 3:01 PM No comments: