Mozart's Magic Flute and the Abuse of Women. 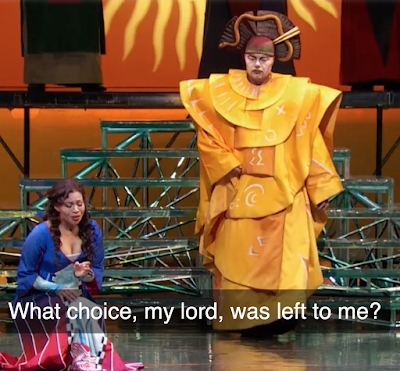 A stunning production of Mozart’s “Magic Flute” by The Met.

It ought to be the perfect introduction to opera as it is easy to listen too and gorgeous to watch. It is a beautiful, classy pantomime. Mozart had to do it and was not the first or last composer to have lower his artistic standards to please his philistine masters and pay the rent but and it is a big “But” the content is really unacceptable today and if it were not by Mozart it would be condemned by all the “Me Too” followers for it condones the abduction of a girl child from her mother simply because all women are evil, not to be trusted the men know best!
This attitude was common in Mozart’s time. Removing children from their mothers was an everyday occurrence. Beethoven did it successfully. He stole his nephew from his mother who had done nothing to deserve it and did not have to give him back.
Pamina loves her mother. She tells her father so but Daddy knows best even though his wife has already chosen a lover for her, of whom he approves, saved  Tamino’s life and given him his Magic Flute that will keep him from harm.
Pamina is left at the door of the Temple that would be defiled if a woman entered. She is kept in the dark about her future.  It is so humiliating and puts every woman in her place. Then her father bad mouth’s her mother in front of everybody just like Donald Trump and his daughter is told if she wants to marry then she must reject her mother and do what she is told by her husband for the rest of her life. No wonder her mother is slightly annoyed about this. I would be too.
The only good part is The Queen of the Night is the most memorable character in the opera.
If the opera were not by Mozart it would not be produced. There are many operas, operetta’s and musicals in this class and sadly most fairy tales would not cut the mustard either. Time for them to go?
Still, I have watched three different 'Flutes' in the last few weeks this is the one I liked the best but I always feel uncomfortable when it is finished. Incredible standard. I just hope that Covid 19 does not damage this wonderful company. 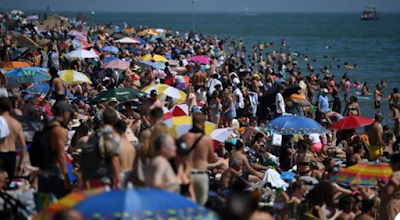 Bournemouth! My family loved Bournemouth. I got taken there every year by my grandparents and I hated it but I did learn to play croquet and table tennis. My parents hated NZ and retired there! Bad choice as they learned to hate it too but, wow I never saw the beaches like this before.
This comes from having a lockdown and stopping this lot from going to Spain! In desperation, they have all come to Bournemouth. I cannot for the life of me understand why Spain wants them back!
Watch this space for another spike of the virus in two weeks time.

It even shocked Germany!
Posted by Janette at 9:18 AM No comments:

How to grow Slipper Orchids in Auckland 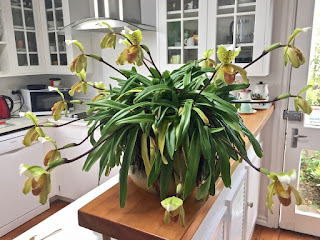 The second orchid of the year is my magnificent Slipper Orchid with 17 slipper orchids. Three are hidden.
This year it has excelled itself after a few disappointing years where it has produced just seven or eight and once five.
I have had it for 18 years and was given to me by a neighbour who was about to die. It is her memorial and I think of her every year when it flowers
To get them to flower well is very difficult but this year I found the right place for it to thrive.
In Auckland, it goes like this. It likes the morning and early afternoon sun outside for the summer and no watering just the occasional shower.  Keep it dry. It does not like being disturbed so no cutting for friends or repotting as it will sulk for years. A small feed and watch for slugs all the time as they eat the bugs. This is the moment I would reach for the slug pellets if I had them.
Water from February on, that is autumn here The moment it starts to flower usually in June, bring indoors and enjoy for a couple of months.
Next year it will possibly rest and it will be back to seven but aren't they gorgeous.
The secret of a nice garden is "never move!" Stay in the same place and learn what flowers for you. Takes about 45 years but what a reward.
Posted by Janette at 9:10 AM No comments:

The Sad Tale of Patch the bunny

I have acquired a bunny!
I do not want a bunny but it seems the bunny has decided it likes me. His name is Patch and it is a really sad story. A few months ago some very thoughtful neighbours decided they no longer wanted their pet bunnies and as they were moving let them go!
Bunnies however cute are not wanted in NZ and one is only allowed to keep them under special conditions however NZ being sensible if they are spayed and people do not object they can live wild if they can!
This bunny has been eating my young plants. A well ago it ate my new expensive young rhubarb and a few others and I am afraid I was as enraged as Mr MacGregor of Peter Rabbit. I used to chase them out but about 10 days ago two nasty red setter dogs who were not on leads caught Patch's mate and killed it!
Bunnies are not supposed to have feelings but this one lingered saw where is mate was buried and tried to did her up! It was heartbreaking. It is winter so I have decided to feed the bunny. At first, he ran a mile as he knew I would chase him but gradually over the past few days he has responded with rabbit pellets and carrot and he let me stroke him.
So now I have three tuis, two doves on with a sore wing and a bunny! I am not supposed to have animals but he is so cute.
Posted by Janette at 2:21 PM No comments:

"Satyagraha " a Corvid19 treat from the Metropolitan Opera 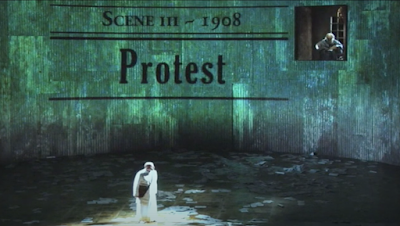 Having had a go at "Akhnaten" at the Met yesterday I thought I would have a go at "Satyagraha " today. Both operas are by the minimalist Philip Glass. Having now experienced two of the most fabulous staged productions I have to admit my husband was right. It is like watching grass grow.

The little trailer is about 4 minutes long and really that is it but the whole opera takes nearly 3 hours. A few cords, a very basic vocal line mainly grunts and without the brilliant production a very boring evening. I cannot see these operas ever being given a concert performance! This one is made even more incomprehensible as there are no subtitles on purpose. Even Wiki did not come up with any useful programme notes. Act I was a few simple chords and grunts, ditto Act 2 but in Act 3 we got a couple of scales and lots of sellotape.

Posted by Janette at 6:53 PM No comments: 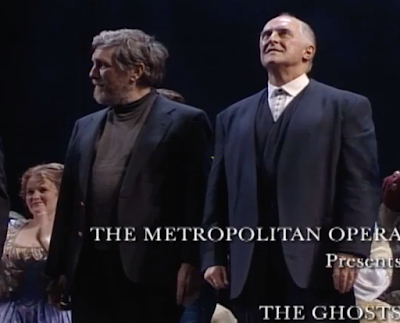 I have waited a long time to see the original  1992 Metropolitan Opera, New York production of The Ghost of Versailles and it was worth it. What I did not realise is that the director was Colin Graham who was the director of my first opera "Noyes Fludde" in 1958 at Aldeburgh. We children, well Michael Crawford used to call him "He of the tight trousers"! I was so lucky to hit Colin as a director when I first started as he was punctilious and controlling down to the last eyelash. His 45 minutes of "Noye" was packed with intricacies. It took him 6 weeks to perfect.

Colin is the perfect director for this production which is packed with special moments and he pulled it off magnificently. He was really never truly appreciated in UK opera circles even by Britten who overlooked him on many occasions. I remember congratulating him on a particularly wonderful "Orpheus" at The Royal Opera House. His sad reply was "They haven't asked me to do anything else!" which was really all our loss as he was a truly great opera director as this production is evidence.

Still, this is a worthy finale. He ended up for a while as a monk is a strange cult in the Bible belt USA but left after a year. I am so glad the Met gave him this 20h Century grand opera. He gave them their money's worth.

Posted by Janette at 7:49 PM No comments:


I listened to Julie Baines the producer talking about her film Four Children and IT on BBC World this morning and how it took 8 years of her life. It was fascinating and informative. Like the BBC interviewer, I was touched by her enthusiasm and tenacity. I have loved this story since I was a child a long time ago. I remember seeing it on BBC children's TV in black and white.

Because of Covid19, this film has been denied its theatre exposure. That was just such bad luck but as I live in New Zealand and I also live next door to an art cinema I may get the opportunity to view.
For her sake, I do hope so as without it the backers may not get their money back.

Was this a wise choice because another film version Five Children and It was made in 2004 and rather well too looking at the trailer. E Nesbit published the story in 1902 and it would have been out of copyright. That is 6% of the budget saved.

You can tell a lot from a trail. Gone are the days when the audience just had to take what was given. The audience is now an expert and very choosey.

Casting is crucial too and it has to be right. I think Russel Brant is one of the greatest Shakespearean comedy actors ever but even in the few shots in this trail you can see this is not his forte and Michael Caine's voice is not right either.

Will I go? Although NZ is supposed to be Corvid19 free I am still anxious but I wish her the best. 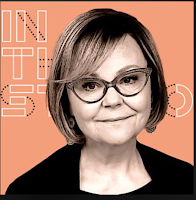 It doesn't help when Julie Baines does not have a Wikipedia entry either. Nobody has thought in the film world to give her one, you cannot write your own. No male producer would put up with this.

The world needs people like her to have dreams even if they don't always work out the first time as the may the second.