This is an excellent article on Choosing Your Vocal Coach-Pianist but this relies on finding and being able to afford this luxury. This is a big problem for singers especially like me if you cannot play the piano. It can also be expensive and sometimes impossible to find an accompanist who can play difficult accompaniments.
I could never find one to play "The Songs of the Auvergne". My answer was to make sure I married a man who loved music and could play the piano. He was not perfect, could not transpose and was not "performance proof" but every day for 30 years we sang together. He could not manage "The Songs of the Auvergne".Then he died. I lost my husband and my accompanist. I did try with the locals but they were expensive and you have guessed it could not even start on "The Songs of the Auvergne". This was in 2002 and I thought I should never sing again either in private or in public. Then a miracle happened. Computers arrived in 2007 and Garageband. I started to play with the "loops" and one day I added with great difficulty one or two notes of my own using The Keyboard and the Piano Roll. It as not until a few weeks later that I thought if I can write out a few notes, then possibly I could write out a Schubert Song. I tried first using the conventional notation but found the Piano Roll easier. It was a success. It took me over a week but I had an accompaniment, one that did what I wanted exactly. No wrong notes, right tempo and could transpose at a click and is on hand when convenient to me.
I have never looked back. Garageband could also handle "The Songs of The Auvergne". I wrote it out as a piano accompaniment at first but then I decided to orchestrate and bingo! It was easy. It now takes me about 2 hours to write out a song. I put up "The Songs of the Auvergne" on YouTube. Yes, it was a challenge but if I had had this tool when I was young it would have made all the difference. It is difficult when you can sing but for reasons cannot play an instrument. It means one can learn difficult roles and learn with the orchestration. I had to learn "The Turn of the Screw" for Britten at the age of 15 with no help from anyone. I then had to sing it on British TV live with only one orchestral rehearsal. That was truly scary. Had I had Garageband and could have written out my part and practised it when I needed life would have been better and my fear of performing made easier. I could not find an accompanist who could tackle this is 1959. Today one can get many classical songs as midis. You just have to know how to use them.
Obviously, a real pianist is preferable but they are expensive and not always available but worth it if you are like me who loves to sing but needs an accompanist. Then when you find a wonderful accompanist, mine was Britten we sang Schubert together you can enjoy it. He let me sing in English and was willing to transpose when needed or even when I didn't know as he chose keys for me!
Posted by Janette at 10:00 AM No comments:

Labels: Accompanists for singers, The Songs of the Auvergne

Sir Bob Elliot a tribute from a grateful patient. 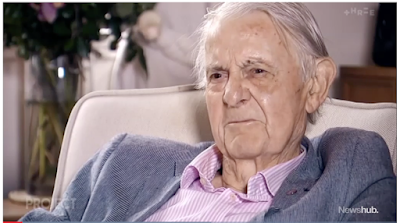 
This amazing man has just died. I have to thank him for saving me from becoming a Type 1 diabetic. I never met him but about 20 years ago I was put on one of his research programmes to prevent diabetes. Both my parents and my cousin have diabetes and so I qualified for this research. When I was tested it was found that I had a six out of ten chance of becoming a Type 1 diabetic but Sir Bob thought that large amount of Vitamin B3. Nicotinamide could prevent this.

For three years I took huge amounts of B 3 each day and slowly like a miracle my platelet levels returned to normal so normal that I have a 99.99% chance of not becoming a diabetic. I kept all the lab test results so you can see it happen. Sadly this has not been taken up universally by the medical profession who were very jealous of his success and NZ hates "tall poppies" but it did work for me and I was so lucky as he has saved me from needles and injections for life. How many other pre-diabetics could be cured?

I am so grateful to this man I have never met.
Posted by Janette at 7:23 PM No comments: