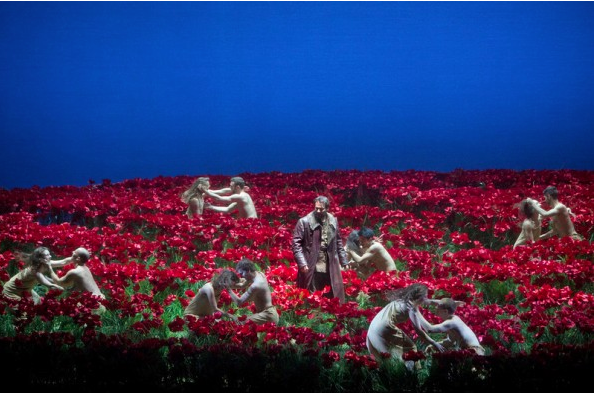 I am mature and have been going to the opera since I was 10 but I have never actually seen a performance of Prince Igor. I did know the famous bits especially the Polovtsian Dances as at the age of eight  a choral version of these were the warm up for Disney's Fantasia. The famous theme is better known as the musical comedy song Stranger in Paradise.

I never go to any opera without doing my homework which on this occasion was the Bolshoi's latest production. It lasted 2.34 hours. It had a particularly rousing Polovtsian Dance sequence which lasted for 15 minutes of exhausting dancing of which the Ruskies are particularly good and bought the house down as it is meant to do and a very effective final scene. The plot seemed creaky and a succession of set arias. This was not effective.

I  discovered thanks to Wiki that Borodin had had a problem with this creaky plot too. Not surprising because he had no idea of exactly what he was aiming at. He just composed a few set pieces when he felt like it and after 18 years gave up. It was left to Rimsky Korsakoff to orchestrate the famous dances and with the help of the ballet composer Glazunov who wrote Act 2 and 3 finish the opera. A glimpse of the structure shows just how little Borodin wrote.

I was determined to enjoy it but the opera did not get off to the best of starts. I was late! Or rather the opera had started early. Half an hour earlier than in the brochure so I missed most of Act I, the best bits. Luckily I had seen the Bolshoi. I arrived just before the poppies. I read and watched my friend's review so I had been warned.

Price Igor is a Russian icon so it is courageous of the Met to have a go at staging it. It is rather like the Russian's having a stab at Mary Poppins they tried but it doesn't quite work. I find watching the Russian's Mary Poppins amusing and I expect the Russians are falling in the aisles with Met's version of their Price Igor.

Admittedly having a Russian director should have helped but this work relies on brilliant singing and scintillating Polovtsian Dances.My USA friend did not like these dances and thought that they were the best example of the worst opera ballet ever. I am not going to be quite a unkind as that. I can appreciate that even with all the money in the world the Met is never going to rival the Russian's in this type of spectacle in any way but I liked the conception and choreography which was imaginative and creative. This was not helped by the camera angles which went for close ups so missing the overall pattern of the dancers which was extremely well danced.

I really could not take to Anita Rachvelishvli as the luscious, sexy Polovtsian princess. I do not like wobbles and you could drive a double decker bus through her vibrato. The costume designer who obviously hated women did not help by giving her the most unattractive costume. A dirty white off the shoulder shift. Why is it that well endowed opera singers feel they have to go for off the shoulder bare it all ensembles which leave the audience wondering when exactly the boobs are going to pop out? They all do it from Renee Fleming down.  Every time the diva takes a breath the audience gasps in anticipation. All the budget went into the flowers and none went into the ladies costumes.

Vibrato seems to be in vogue at the moment. All  the singers with perhaps the exception of Oksana Dyka exhibited this trait. Maybe it is fashionable in Russia but I don't like it. Vocally too I found some of the men had a fuzzy range when it came to tonal accuracy. I like singer to be bang in tune not just nearly in tune and this is essential with the most melodic of operas. Boro/Rimsky/Glas knew how to write good tunes but some of the singers seemed way off the mark and the vocal line unrecognisable.

It is a slight, uneven work but I enjoyed it on its level. I would have enjoyed it more if this work which lasts 2.34 hours in Russia was not drawn out for 5 hours in the cinema. The intervals were just too long. I couldn't decide if the presenter would have made a better Happy or Bashful in the Seven Dwarfs as he was sort of bouncy. Then it appeared the Met had its problems too. Cut these intervals please.

Being an opera director myself I was intrigued to see the advances in backstage machinery since my day. I never had moveable sets. When I was in the opera and ballet we were never allowed on stage during the scenery changes as it was too dangerous. I don't think the best is made of its opportunities. I think too a lot more could have been made of the Polovstian Dances if the cyce had been used for imaging. Could have been magical.

Another thing that still bugs me about opera direction is the way that emotions/actions are so unlifelike. This type of direction is so old hat. When did you last get down on your knees to beg for anything? Or walk around clutching every bit of furniture you can see? Or stand with back up against walls while talking to someone clutching the door post occasionally for effect? Or curling up on the dining room table and going to sleep? This production went in for stroking, everyone stroked. Stroking people is off limits these days, people. The scene with the huge Princess pulling at her lover and the father pulling the other with her crawling on her knees was embarrassing. People never behave like that ever. Less is sometimes more in opera direction as the music heightens emotions without any help.

Well I have seen it once and I think once is enough unless I go to Moscow but good show Metropolitan, 6 out of 10 for trying. Onto Werther another opera I have never seen. That's three in a row. La Boheme, always miss Puccini and then  Cosi, one of my favourites.