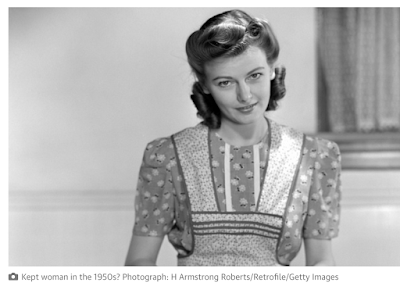 The UK Guardian published an article entitled My two years as a kept woman which amused me as I was brought up, like Collette's Gigi, to be an official courtesan or in other words a good wife.


The New York Times recently published a piece about the lives of the hyper-rich stay-at-home women on the Upper East Side, complete with sex-segregated dinner parties and year-end bonuses from wealthy husbands for being “good wives”.
These may appear surprisingly crude to some, but less so for me. Much of my short marriage felt like a business transaction during which I was paid $325 a week, in an arrangement that was certainly not as privileged as those women on the Upper East Side, but would still be considered one of great fortune within larger social structures.
The experience was one of obscene inequality that rarely gets recognized as such. With the backing of “romantic love” and a rhetoric of choice, I found myself knocked back the loser in a deeply ingrained power relationship that constantly renewed itself. UK Guardian


Up until this century all women were kept women!  We got married as our education had been sadly neglected, we kept house,  we looked after the children  and we got housekeeping money.  The social contract was that for this we should get a pension at 60 and be looked after in our old age.

The world was not set up for women to work and look after themselves. In my day having one's own career and pension was very difficult. We had to marry carefully, hopefully for love and pension. Maiden aunts, of which there were many thanks to two world wars had a tough time.

Thankfully the world in some countries is changing but not as fast as it should. In many countries, women are still slaves to this system. My generation had to break the mould and reading this article it appears we did a good job. Young women do not have to become housewifes.

I suppose I became a kept woman when I married my husband. I think he would have preferred me to have been a real kept woman but in those days this was not on as one could get kicked out and no time to find another pension provider. Shelf life of a woman is short. The nuns taught us to be realistic. It was nice to sit in the stalls instead of the gallery and not get one's bottom pinched in Italy.

The terms changed for me when my husband was attacked in his surgery and could no longer work then much to my surprise I became the owner of a kept man and family and had to keep them in the manner to which they had become accustomed. To everyone's surprise, even my own, I did.

Planning for old age when you are young is a good idea. Purely selfishly, one needs a pension and an education if you are to get through this difficult period with some dignity and sanity.

Lastly I think the writer did rather well out of being a kept woman. She was old enough to know what she was doing, got a green card I suppose and an education. What more could a girl want?