Olivia Coleman & How to Steal The Night Manager 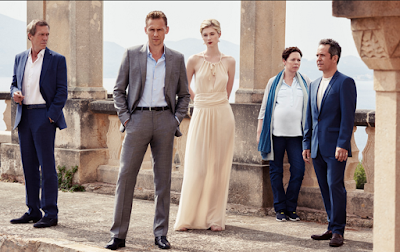 The Night Manager - BBC's spy mini series based on John le Carré's famous novel starring two of the most sort after actors, Tom Hiddleston and Hugh Laurie in the parts of their lives. There they are in the publicity shot and for 5 of the 6 episodes they spar in a most engaging way to be the winner. There is the beautiful love interest and the not so beautiful male love interest, both of whom are prominently featured and then there is the pregnant woman at the back, a woman of little importance and really as Olivia Colman the  actress puts it "What on earth is she doing there?"

The short answer is stealing the show for it is not Laurie or Hiddleston that walk off with the honours in The Night Manager, although they try but the woman who is spoiling the photo!

Every so often in an actor's life the author gives them a gift of a part that is a scene stealer and Olivia Coleman has been given one of these and to her credit she steals The Night Manager beautifully.  Yes she is there from the start but you don't seem to notice her much. She is dowdy, pregnant and very down to earth, she almost gets lost while the two hunks deliver some glorious scenes and the BBC provides glorious scenery.

But is the gripping the throat what on earth is going to happen as one waits for the expected showdown between the male lead that it is Ms Coleman who steps in almost at the last moment and delivers an unforgettable performance leaving the two men and everyone else with a feeling that they have been cheated. She steals the episode and the series, game set and match.

And Olivia Coleman does it so well too and she and the writers deserve an Oscar. She won't get one as she is British but she deserves one. Olivia Coleman knows how to scene steal. On Graham Norton's show she wiped the floor with the other guests one of which was Sir David Attenborough and again Hugh Laurie and deliciously out witted Graham Norton too. It is her understated appearance and her carefully studied naivety that is so disarming.

A famous actor, I think it was John Mills,  said it is not how many lines you had it was where you had them, preferably at the end of the piece. His example was Ibsen's Wild Duck where a doctor arrives right at the end and in 13 lines steals the show. Everyone else killing themselves all evening and the doctor in the last two minutes is the one the audience  remembers. Some parts are scene stealers. Shakespeare had to kill off Mercutio in Romeo and Juliet because he was in danger of eclipsing the lovers.

So Hats Off to Olivia Coleman. That is why she is in the photo and has third billing. If it the character had not been changed to a woman and played by a man as it could have been, say Hugh Laurie, it would have had top billing but she doesn't  get the billing she deserves but should!

Olivia is now tipped to become James Bond and as her famous last line now puts it: 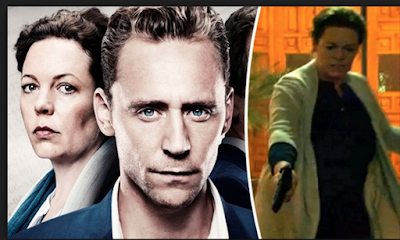