Why not bring back the Temporary Employment programmes of the 1980 in NZ ? 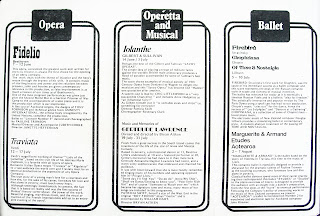 Why not  bring back Robert Muldoon's amazing
Temporary Employment Programmes of the 1980's?

My mother had a thing about jobs! She believed that everybody who wanted to work should have a job and that governments tampered with employment at their peril. "It is easy to close a business and sack people" she used to say as another business was closed down or sent offshore "But it is expensive and sometimes impossible to start them up again as all the skills have been lost". She was right. Peoples jobs are the most important thing they possess in their lives. Ordinary people hate losing their jobs. It is so stressful, degrading, and humiliating when one wants to work but the jobs are not there.

All performing artists and musicians need to perform. They cannot wait until they are dead. I was lucky in UK at that time in the 1960s there was a career path that could be followed.  It took me from 18 to 24 to get into a leading role in  London's West End. Six years of almost daily performances to learn my art. When I came to Auckland with my GP husband I was astonished at the standard of the local performing artists here in Auckland. If they had been in the UK they would all have been stars. Kiri Te Kanawa was not an exception, others were as good as if not better and all had little if nothing to do. They needed jobs.

The year was 1982 and Robert Muldoon the Prime Minister believed in employment and giving people a chance to get a foot in the door by offering full time employment for six months on a Temporary Employment Programme on full salary. Yes, full salary that was paid by the government. The employer had to provide everything else.

I applied and was given such a scheme for Auckland Artists. It was based in The Concert Chamber of Auckland Town Hall and the idea was to start up a small opera/ballet company from scratch using a core of artists and production staff for each production and the opportunity to give many others part-time employment as well.

To begin I had six young ballet dancers straight out of ballet school, one ex NX Ballet, two from the NZ Ballet School in Wellington, but the rest from Auckland. These six young dancers were the luckiest ever as they got paid the same as the NZ Ballet, three full time opera singers, who had to help with the administration when not in an opera, a full time ballet director, Pauline Tronson who was amazing, A manager and secretary, a box office manager, a cafe manager, two stage managers.

Was it easy? No, as most of these had never worked in a fulltime theatre before, so I had to teach and train them as well but it gave them a start. We did some amazing productions with nothing but NZ raw talent and many went on to have remarkable careers, including me as it gave me a start too as an opera director, women no allowed here too at this time, although I was one who did not get paid.

So how did this Temporary Employment programme turn out in the long run?

Take a look at the programme above.  This was the programme for the PEP scheme. I commissioned the practically destitute Tony Fomison to do the mise-en-scene for our first opera Fidelio by Beethoven. Fomison was Hamish Keith's suggestion. Fomsion was the only artist I have ever met who was prepared to starve for his art. Admittedly Fomison was not on the scheme but because of the scheme I was able to commission him and give him work. Fomison needed it. Today the painting above Fidelio Act 2 is one of his most beloved works. It is worth a fortune. I have to fight for my copyright and ownership as one, it turns out a copy has somehow landed up in The Auckland Art Gallery and one, another copy in the BNZ both of which I could if I so chose to ask to be destroyed but I do not indulge in acts of artistic vandalismm. Without me and the TEP production, these would not have seen the light of day as Fidelio would never have been produced. One day it will be produced again. It was amazing and full media mix of ballet opera and mise en scene and now Fomison is famous I should get the Aotea and the NZSO.

Artists who got employment because of this scheme, Amanda Price/Scog who for years managed the Royal New Zealand Ballet, Pauline Tronson, Ballerina, Chick Littlewood,  Lousie Malloy, Wendy Dixon, Ingrid Walberg, Moya Rae, Gillian Trot, Lyndsay Freer, David Guerin, Katie Smyth, Malcum Burn, William Dart, Rodger Craig, Marcus Craig, Patricia Swift and many others. Steven Bradshaw, who could not dance a step got his professional start with me, later he was not grateful but then that is par for the course and that is what TEP schemes are for.

For me, by accident, I discovered the world of children's shows. The council admin staff, who did not help one tiny bit, threw me out of my small 480 theatre during the school holidays but then felt guilty at what they had done for it was a disaster as although my TEP employees got paid I had to pay for everything else including the rent of the Concert Chamber. The Council offered me the Town Hall morning and afternoon for $300 a performance. I threw on The Tales of Beatrice Potter and bingo over 23,000 turned up!

When my TEP scheme finished I had enough money to carry on with highly successful children's shows that subsidised my serious opera and ballet productions as you can see in my live CV.  These ended up on NZTV and the BBC. Without this Temporary Employment Programme this would never have happened.

The productions, one or two I had videod, still look acceptable today as you can see in my live CV I made when YouTube first started.  Sadly I needed just $75,000 as a grant to continue to build this small company. It was not granted. The QE II Arts Council needed exactly $70,000 to upgrade its new offices in His Majesty's Arcade which it did. A short time later  His Majesty's Theatre and the newly decorated Arts Council Offices were pulled down. Such is life but my Fomisons live on! Think what Auckland could have had if I had been able to continue.

Was it easy to do? No. Did I enjoy it? No. Would I do it again? Yes. It was socially well worthwhile. I could never have raised the money to do this startup. These skills would have been lost, especially the dancers as they needed continual employment. To have a rich society one needs to make sure that the talents are used and that means in some cases it is the government's responsibility to fund such ventures as taxation is so high.

Firms we have lost abroad Fisher & Paykel, Moontide, Cadbury's, all should have been saved.

Everyone deserves a job not just the fortunate few. I applaud Robert Muldoon for doing this. Muldoon had his faults but he was right to do it.