The Dark Side of Benjamin Britten 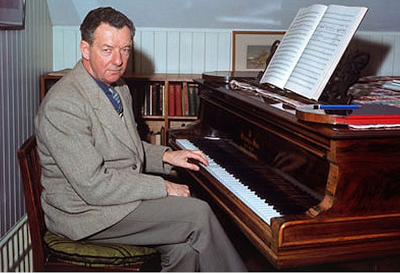 2013 is the centenary year of Benjamin Britten's birth and it seems that it is open slather on his character. Everyone is having a 'go' and I find it all fascinating. I have been fascinated by Benjamin Britten ever since I saw his Opera 'Gloriana' at Covent Garden in 1953, Coronation year when I was just 10. I still have the programme.

You either seem to hate Britten or love him, there is no middle way. Books and biographies official and unofficial have been published each with more startling revelations than the past, unknown young loves appear mainly male and little boys are interviewed on their relationships with the composer. There is one particularly vicious web site that is quite outspokenly hostile and even a TV documentary on Britten's failure as a composer. The list goes on and on and yet Britten is still an enigma. What exactly makes the man tick?

I have been a bystander on the Britten scene since 1953 but to my surprise, in 1958 I became more than a bystander as I was employed by the English Opera Group to play Mrs Sem in the first production of Noyes Fludde. Unknown to me  I was a success and became a Britten favourite. Unusual as I was a girl and for the next five years I was part of Britten's scene, not Aldeburgh's scene as the Aldeburgh set did not see me but I was there and I got to know Britten rather well.

It has taken me years to piece my experiences together but as everyone else has had a go perhaps it is my turn and this is how I explain the dark side of Benjamin Britten. Well at least it is food for thought and you never know I could be right.

The key to Britten's major work is his sexuality. It dominates everything he wrote.

Benjamin Britten the son of a Lowestoft dentist was a talented child who had the misfortune to be born into the middle class in 1913. This meant that at an early age he would be shoved off to an English Upper-Class boarding school, all male of course and from then on deprived of all-female company. The male precept of the period was 8 is a good age to cut the umbilical cord. Britten never recovered.

The British Public School of the 1930s has a lot to answer for. Boys who are segregated from the opposite sex and who have no other way of meeting girls fall in love with masters and other boys. This is a common occurrence and when the boys grow up usually they meet young girls of eighteen and all is well and put all that behind them.

Britten didn't. The young adolescent girl meeting period was left out. Britten was unlucky because he did not go to university but a music college and girls were not around as orchestras liked boys!  Then he was attractive and was taken up by the WH Auden set and was probably bewitched by them. Gays definitely have more fun. Being a wonderful pianist he was soon captured by a tenor Peter Pears. Singers at that time were always on the lookout for an accompanist as it is cheaper and oh so useful and Pears never let go.

There is no doubt that Britten was unsure of his sexuality at that time and really for the rest of his life. Although bombarded by his gay peers he refused at first to submit and it was only after a few years and much courtship that Pears got to do the deed in the USA. Pears was gay and had many partners and this is when it is thought he gave Britten syphilis. Once Pears had Britten, Britten was trapped.

Up until 1964 homosexuality in the UK was a crime even with consenting adults in private. You went to prison if you got caught and many did. Pears had this hold over his partner. If you leave me I tell! They were stuck with each other. Unlike a marriage, there was no divorce. Britten and Pears had to live together whether they liked each other or not.

Artists write about what they know so Britten wrote about the darker side of male relationships. All his operas are centred on this theme. It is as if he were taking revenge on the all-male world in which he lived and thrived for preventing him from experiencing heterosexual love which he craved but has never consummated

Every part Britten wrote for his supposed lover Pears was a villain or a simpleton, a tyrant, a child abuser, a closet paedophile, a traitor. If Britten loved Pears he had a very strange way of showing it in the parts he wrote for his paramour. In the first opera, Peter Grimes is a child abuser and murderer and the list gets worse and worse.

It has only just been admitted that the partnership was more of a business arrangement than a love match. For long periods Britten and Pears lived separate lives only coming together when work called. I could have told you that.

It is in his masterpiece 'The Turn of the Screw' a novella by Henry James that the key to Britten's sexuality is revealed. It is there for all to see. 'The Screw' is based upon the sexual choice a male child is forced to make. The child has to choose between the homosexual love of a manservant and the heterosexual love of a naive, sexually innocent governess. The child cannot choose and loses his life either physically or metaphorically.

From then on the Britten and Pears romance faded. Peter went on to other loves and Britten became celibate and bitter. The eroding partnership was never made public. Britten never came out in his lifetime. He wanted to be considered normal and he would have sued anyone who said otherwise. It was only three years after his death that Pears made the announcement.

Personally, I think Britten came to loathe Pears and that is why the parts for Pears got progressively nastier till the last opera 'Death in Venice'a cruel depiction of a dying man lusting after a young pubescent boy when Pears went on record as saying that 'Ben is writing an evil opera and it is killing him.'

It is not known if Britten ever experienced physical heterosexual love. He never got the chance. Britten was too well guarded. Britten certainly loved Galina Vishnevskaya and I know he liked me a lot and although Rita Thompson will never admit it Britten liked her too, banishing Pears to the USA.

Britten always loved looking at young boys whether he followed through is not known.  Maybe his young groomed conquests are just too nice to say but if my experience is anything to go by Britten would have controlled himself. It is as if he had the classic Peter Pan complex about being a young boy forever and never grew up and pleasing himself by inviting children to the wonderful world of 'Aldeburgh Never Never Land' to make an opera. A case of arrested development pas excellence.

There is no doubt Britten loved men but he could have loved women too if given a chance, he wasn't and he made do with young boys.

My theory is that Britten's main tragedy is that of Miles in his masterpiece. Britten was just unable to choose and for him he had to live on in bitterness and disillusionment wondering what he had missed, hating his partner and taking horrible revenge by writing despicable roles for him for the rest of his life and regretting that he was never able to write an opera about heterosexual love.

I liked the man. He was one of my admirers, a notch on my belt, he had everything I wanted but too old. Pity he did not meet me when he was 19 or even 30! But it was too soon for me and too late for him. But Britten did give me my career and place in posterity and for that, I am extremely grateful.