Yesterday's Music by the Beatles 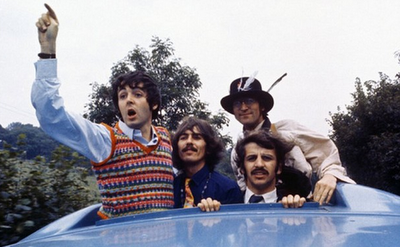 I once saw the Beatles in real life, well three of them, Paul wasn't there. They were crammed into a battered mini going around a roundabout in Richmond. I was in my rather smart mini with my Spanish girl friend Virginia who was stunningly beautiful and I spotted them. Virginia yelled out "It's the Beatles" and we chased them around the roundabout.

They looked very bad tempered and in fact one week later they broke up.

Being classical leaning I was never a fan of the Beatles. I prefer Schoenberg myself who I find just as tuneful as the Beatles and far more inventive. I could never and still cannot see what anyone sees in them. Rubbish! So it is no surprise to learn that today people are actually daring to think that some of The Beatles songs might not be the masterpieces they thought they were at the time.

The Beatles always were overrated, over paid  and with an over exaggerated sense of their social significance.  Thanks to their obsession with protecting their copyright they will soon be forgotten. They have ensured that no one today plays their music. To be remembered music has to be constantly played and the style constantly updated.

In USA last week a researcher asked teenagers on the streets  if they recognized Love me do and what they thought of it. The answers with the exception of one girl who thought it might have been the Beatles were that it was a load of rubbish and I think that just about says it all.

Artists and composers today beware of being too protective as you might be digging your own grave of extinction. Ten years are yours to exploit but after that you will need other artists to reinvent your work to remain in the public eye. Believe me on this one.

Good moments Yesterday  and Imagine but even Yesterday is almost, dare I say it, Yesterday today.
Posted by Janette at 8:56 AM

Labels: Love me do, The Beatles