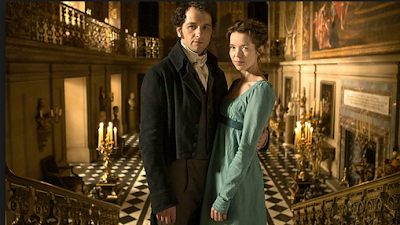 Enjoyed BBC's Death Comes to Pemberley so I decided to read the PD James's book and compare I first did this exercise when I was ten when I compared Olivier's film of Richard III with the Bard's. I was very precocious. Both adaptations were miles from the originals and I wonder just what PD James thought when she visited the BBC set. Was she aware of the hatchet job?

For an Xmas murder mystery I suppose the BBC felt they needed the hanging and the arrival of the King's messenger  in the form of Elizabeth Bennett as Miss Marple and indeed the series did prompt me to read the original book which I loved but I cannot see the justification to reduce a well known author's work to such a major and unfortunate re-write. The confidence of the BBC Drama Department to be able to do this and get away with it amazes me. No on second thoughts it doesn't. The BBC have always been arrogant.

Ms James has penned a delightful tongue in cheek parody of Ms Austen and the book is cleverly braided to amuse lovers of the original. Mary, the plain daughter gets married leaving the more attractive Kitty on the shelf, Mrs Bennett is left at home and just when the novel is ending Ms James offers another touch of genius. The solution in the book as to who is to look after the unwanted child which in the TV series Mr Darcy accepts to meet today's politically correct standards, is  given to a Miss Harriet Smith of Highbury and comes highly recommended by a Mrs Knightly. No happy ending for the child!

The court case in the book is tried in London at the Old Bailey. Louisa, the mother of the child does not recognise Wickham at the inquest. Colonel Fitzwilliam is not the bastard he is made out to be,  quite the opposite and if I were him I should sue and Mrs Darcy knows her place and plays no part in the denouement. The adaptation is a travesty. Why the BBC did not stick to the original novel I shall never know as PD James is much better than hack screenwriters. It is lucky I did not read the book before seeing the BBC's version as I should be so furious my Xmas would have been ruined.

So congratulations PD James, pity your publishers and agents did not get script control. I hope many more are now encouraged to read your book. At US$6.50  on Kindle it is a great read.