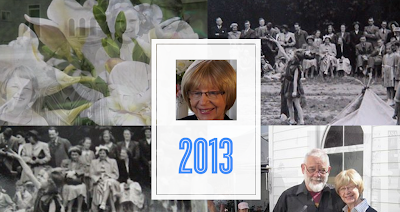 2013 has been an exceptional year for me! Quite unexpected and in some ways unbelievable. At the ripe old age of 70 when one's life is supposed to be over and there is nothing left to which to look forward a year pops up and delivers some of the goals that you thought you had missed arrives by magic without you doing a thing.

I have two blogs, one for my family Janette Miller's Strange Life, where I can reminisce  about the past without boring my family stiff, I get very few views but it is good social history and one day a great grandchild might, just might be interested.

This blog is where I get things out of my system so I can be a bit grumbly on occasions, a bit like the character Victor Meldrum who finds life in his mature years unbelievable! This year I shall try to be more positive if I can so I shall take this opportunity of saying just why 2013 has been so strange and yes exceptional and none of it was of my making.

Putting aside that access to enough B12 healed my compromised nervous system and why UK doctors fail to give patients enough injections of a vitamin necessary to do this I shall never understand. The fact that my garden has been ravishing thanks in part to a glorious summer here in Auckland and I watered it, my year has been exceptional because of the patronage and friendship of one man who 56 years ago saw in a tiny 14 year old, mousy, formally uneducated child something that made her special to him.
Although none of us knew it in 1958 this man who at 44 was famous but not a superstar has gone on to icon status and taken all of us who he favoured along with him. 2013 was the centenary of Lord Benjamin Britten's birth and as one of the few left standing who worked with him and knew him I became part of these festivities without lifting a finger.

Nothing could be stranger than finding oneself part of such an illustrious scene 56 years on. If I had been told then that a tiny part in a children's opera would lead to my place in posterity I should never have believed it or that I should have to wait all that time for recognition that what I was asked to do by Britten was quite extraordinary. It still is.

Again this recognition is reinforced because at the time of the actual broadcast of  Britten's masterpiece Peter Morley's 1959 The Turn of the Screw for Associated Rediffusion which was even then an artistic triumph in public was for me a personal family disaster.

Far from my family being proud that their 16 year old relative had the honour of being in this prestigious production my family who gathered expectantly to watch their relative at 11 pm on Xmas Eve  1959 on UK TV hated it. They hated it. They watched in total silence and I could feel the atmosphere going from bad to worse. At the end of Act 1 a stunned family audience were speechless. No applause, no we are so proud of you, just silence. My aunt who was there with a male cousin from Argentina who I only met twice in my life, was shocked. Her grim face said it all.

Nobody said anything. It was after midnight and the TV and tape recorder that had been my Xmas present were turned off. I dared to ask if my family enjoyed it and my aunt speaking for all of them said NO! It was like a funeral. What should have been a joyous occasion was like a funeral. Although my mother had prepared a delicious after viewing meal nobody stayed to eat it. Coats were brought and they all went home. My mother and father too were very subdued about the performance. No praise of any sort was given and we went to bed.  They all returned for a repeat performance for  Act 2 with a similar reaction! Three months later my father wiped the tape as he needed it for his amateur radio.

And yet Britten knew what I had done for him was exceptional. Flora for that was my part, is the hardest role to cast in the opera. It is hard to grasp that casting a girl singer for this role in the 1950's could be so difficult but Britten found it impossible. He had had no idea of how to write for a girl child. Boys yes, he did it all the time but a girl? There were just no little girls who sang in the 1950's. Britten had searched for a child since 1954 and never found one. Henry James' had described Flora as An old, old woman, consequently Britten who was working with an adult Flora made no concessions  and Flora's aria is one of the most difficult to sing in the entire opera as it is high, uses intervals singers hate and orchestrally exposed.  It is terrifying. Britten was brilliant at casting and he knew that for The Screw to succeed theatrically it had to have a child not an adult pretending to be a child. He was so determined to do this that after the original Venice production he would not allow The Screw to be performed again until he found a Flora. He had already auditioned 40 little girls and gave up hope. The Screw remained on the shelf. And then as if by magic I turned up.

Britten knew I was special. He went out of his way to get to know me and help me. He watched me grow up.  I think I may have been the only girl of 19 he ever got to know. Unknown to me I became a favourite. He was so kind. I was given seats for opera's. Invitations to swim, rides alone in the car. He was interested in what I was doing and talked freely as one does to a colleague. I was privileged to be mentored by such a man. I was around Aldeburgh for 5 years and as I grew our friendship deepened.  I knew first he was fond of me as Jennifer Vyvyan told me "Ben is so fond of you Flora", they called me Flora.

My family ensured that I really never enjoyed the success of The Screw.

So it has been somewhat gratifying to discover that the British Film Institute has remastered the iconic recording and shown it  in London to great acclaim in 2013. I am told the print looks magnificent and I am in it. The TV cameramen made me look so beautiful.

Today my family would have been flabbergasted. They were so wrong and so unkind that night 56 years ago. When the BBC asked me recently what my family reaction was the interviewer was shocked. That bit got cut out of the interview. But I do find it incredible that that performance that was just at the start of my career should give me my posterity. I am there in Britten's first TV production for all time for this will always be preserved as it really is his masterpiece. I have been so fortunate. 2013 will be hard to replicate and in fact I don't need to.