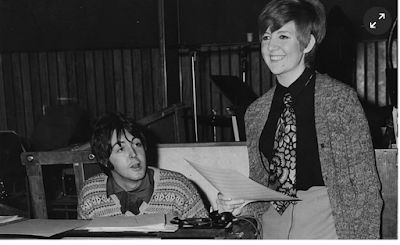 Cilla Black died today at the age of 72 in Spain. Cilla was part of the swinging sixties and an inspiration to many of us women who were struggling to compete on an equal footing in an all male world. However instead of the usual kind and considerate comments that usually follow after the death of someone famous I was surprised at the deluge of just plain nasty comments in the UK Guardian. It was hard to find a nice one.

Here are a few examples and this was in the first few:-

"A voice like a crow if you listen carefully."

"I remember laughing when hearing my aunt groaning as she listened to CB straining to reach a high note on one of her recordings."

"When I arrived in England in 1989 I was a bit surprised at the prominence of Cilla Black whose congeniality and 'hur" and "fur" for hair and fair seemed a bit of a put on to me at the time, but hey, she did it " her way" so fair cop. She is hardly the first working class person who strikes it rich who votes Tory. It's what footballers tend to do as well."

"A tory class traitor. Hilarious how the luvvies all cry over her now when it is they who spread all the stories whispered about her being an obnoxious and overbearing battleaxe in private."

Cilla Black was a character. I was not in her world, I preferred opera and ballet. I worked in London in musicals but I could appreciate just how clever and talented she was. It must have been so difficult to survive and I am so glad she did. She does not deserve this chorus of hate after her death.

Cilla Black was a remarkable girl. One has to take one's hat off to her. She had a really tough road to hoe and she did it brilliantly. It is hard to start at the bottom and reach the top. She did. She defined the swinging sixties for many off us and proved that a woman could compete in the all male establishment of the time.

Cilla has died and with her goes an age so it is with some surprise that I read the comments in this section. Some are kind but a great many are just plain cruel. Why? It seems that voting Tory has a lot to do with it and the fact that many do not like her voice. Bit harsh of the commentators and not terribly British. In fact I cannot think of the last time I saw such a load of unpleasant comments in an obituary column since Mrs. Thatcher who probably deserved them but Cilla didn't. She was and is one of the people and part of British working class culture.

She should have been made a Dame but hasn't. Bit catty of the British Establishment who gave out knighthoods to some very unsavory men of the same period.

I really should not have to be writing this. All I should have to say is RIP Cilla and thank you.