Tea in 2015 is still the cup that cheers Janette Miller 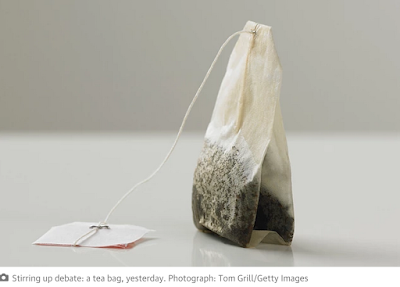 Tea is out of favour. By tea, I mean standard black tea from a teabag. With or without sugar, in a mug or taken away: comforting, habitual, biscuit optional. According to research by consumer analysts Mintel, sales of black tea have dropped by 22% over the past five years. In 2010 Britons bought 97m kg of tea, last year only 76m kg. Mintel thinks that figure will continue to decline. What’s behind Britain’s cooling enthusiasm? UK Guardian

Nothing like good old fashioned British Railways for making one feel good, the sort that came splashed out of a huge steel teapot into lines of waiting thick white pottery cups, with or without chips onto real milk. Delicious.

Those days have passed but I can still get that amazing 'kick' if I add just a quarter of a teaspoon of Tetley's Lapsang Chousong to tea made with ordinary tea bag in a small glass teapot and left to brew for at least 4 minutes. I am not in favour of milk in first as it weakens the brew even though family hails from the slums of Royston in the grim old days.
Tea for me is definitely the cup that cheers but I enjoy coffee and champagne too when the occasion arises say 11 am on a damp morning. In the afternoon nothing like a cup of Paris Tea for that sensual aroma sheer decadence and pleasure.