The Jackdaw of Rheims from Ingoldsby Legends - Janette Miller


The Jackdaw of Rheims is about a cheeky jackdaw who steals a cardinal's ring and is made a saint.


The Ingoldsby Legends is a collection of myths, legends, ghost stories and poetry written supposedly by Thomas Ingoldsby of Tappington Manor, actually a pen-name of an English clergyman named Richard Harris Barham. The legends were first printed during 1837 as a regular series in the magazine Bentley's Miscellany and later in New Monthly Magazine. The legends were illustrated by John Leech, George Cruikshank, and Sir John Tenniel. They proved immensely popular and were compiled into books published in  1842 . They remained popular during the 19th century but have since become little known.

This poem was very popular in my youth around 1950 and all little girls and boys learnt it but sadly now seems to have slipped off the table so on impulse I decided to make  a simple version using images of a bygone age, all nicely out of copyright, so that at least there is one example on YouTube.

I thought this would take  a couple of hours at the most. All I needed was to quickly record the 9 minute poem, add a few out of copyright images and an out of copy right piece of music. I chose the Intermezzo  2 from the opera Jewels of the Madonna by Wolf Ferarri, all nicely out of copyright.  I had a very old 45rpm  1959 record that would do. I checked to see if I could find the owner but after all these years the company and orchestra had vanished. I added a clause to the notes to say I was willing to remove this music if required. Of course video editing took longer than expected but for me simple does not mean sloppy  and the audio editing took a bit to make it fit so a couple of hours became a couple of days and so I decided to put it up only to find that the YouTube algorithms had posted a Copyright Dispute notice! 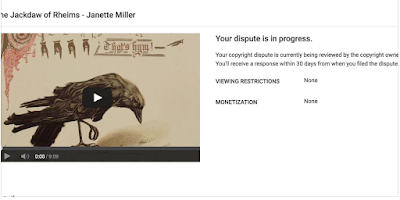 This is one of those notices one does not want to see as they are time consuming. It is also annoying when you find out that it is not the music that is in dispute but the arrangement. It seems as the algorithm was confusing 4 secs of my voice with an arrangement by someone else!  I do not do monetization on my videos. I come from the school that finds this vulgar. I sometimes get huge views for my videos, 20,300 for The Daffodils by Wordsworth, and this dispute would mean that this company would take all my royalties so I had to file a dispute and this can take up to a month to settle. In the meantime I had to take down my Jackdaw Video.

This copyright algorithm theft is a problem and the only way to stop it is to make sure you own every second of your video and that meant writing out the entire score of the Intermezzo! I do not mind doing this but first I had to find the sheet music and the score and actually write it out as a Midi. I enjoy this as it is so fascinating but I am in the middle of another big project and this was not what I had in mind. Still it had to be done for peace of mind.

In the meantime I put up a version with no background music and today if you want views the musical accompaniment is essential. I got just 21 views from this version which I have now taken down. Below shows how I did it using Garageband which has a wonderful Midi application. This took about three nights to do as it is quite long. 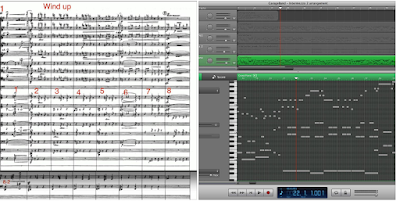 I was not happy with the way I spoke the first few stanzas so I re-recorded and set about mixing. I used a modern arrangement and I think it sounds fun. My new fully owned Jackdaw was ready for YouTube. This actually takes quite a long time to put up and render because I use Premier Pro for editing and the first export to QuickTime Movie at full quality can take a couple of hours and so can the render down to MP4 that YouTube requires. The upload to YouTube takes a few moments.

I just thought I should check on the outcome of my dispute which was still a few weeks away only to find YouTube had caved in. The dispute label was off and I could have used the old symphonic version but I prefer my new one! See below - no dispute.

To make my job even longer I have a 1843 copy of The Ingoldsby Legends that I used as a script and for images and blow me if the old leather cover fell off in my hands. I am a skilled bookbinder but today I have no equipment. To repair the book in the correct traditional manner which I can do  was no longer an option but I was lucky. The break was one I could repair if the book is just meant to be looked at. This took another couple of hours.

So there you are! Hopefully this will help to keep this attractive piece of literature alive for a few more years and children can again enjoy this charming fairy tale.
Posted by Janette at 10:43 AM