Music Education for those who cannot read Music - 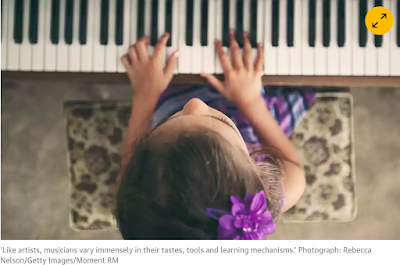 Music Education is now only for the wealthy

So says Charlotte C Gill in an article in today's UK Guardian.  I wanted to comment but by the time the Guardian hits NZ the comments had closed so I had to write on her blog and comment here.Sadly this will only be seen by a few so here it is although I have written on this subject once before so here is what I wrote.

I read the above with much interest. I know exactly where you are coming from because I am in the same position as you. Although I have spent a lifetime trying to read and learn the conventional musical notation I have never mastered  it. I have been called unmusical and looked down upon just because dots mean nothing to me.

I am a professional singer. I am now 74.  In my youth girls were not taught to sing. No choir schools for them where they could learn the language of sight singing but fortunately I lived with an aunt who played the piano and music teacher at my convent school, a Miss Carmen! who encouraged me to sing. I learnt everything by ear although she did try to teach us to sight sing. I was OK on theory but playing the piano was a disaster. I have since learned when I was 60 that I have a problem with my hypocanthus which prevents me from retaining sequences which means every time I face a piano or a typewriter it is like meeting it for the first time. Practising does not help and I did practise. I had to translate each dot every time and I was just too slow.

Young girls who could sing were rare in the 1950's. Benjamin Britten auditioned 40 little girls for "Flora" for "The Turn of the Screw" and gave up and used a small adult. Finding a boy soprano was no problem. Ten a penny. Britten put "The Screw" back on the shelf until he found one. I was in the original "Noyes Fludde" with Michael Crawford who I don't think sight sings and I feel sure David Hemming's could not sight sing either. I made an impact and Britten found his first young "Flora". Britten knew that many children who have talent are no academic training can still be the best choice. We were all trained by rote. I had the honour of being accompanied at an Aldeburgh  Wagner recital by Britten, possibly the only girl who has ever done this.

All my career in opera and musicals I learned roles by rote. I taught myself "The Screw" by records and picking it out slowly on the piano and it worked well.

When I retired I was lucky enough to marry an Oxford educated GP  Miles Heffernan who played the piano and loved Schubert and every morning for 30 years we would make music together for our own enjoyment. Then he died. I had lost not only my husband but my accompanist! I knew I could never afford to sing like this again and for 6 years I didn't.

Then came the computer revolution and I discovered Garageband. I just played about with the loops for a couple of years and then one day I discovered 'The Piano Roll' and this application changed my life. I had to change a couple of notes and I thought if I can write out a couple of bars maybe I could write out the accompaniments for my Schubert Songs. The first song "Hark Hark the Lark" took a week but I could sing again. I could change the key, I could choose my own time, No wrong notes. It was like being born again. It felt like the day spell check arrived for people who cannot spell. I went on to learn how to orchestrate and have become very efficient at it, orchestrating Richard Strauss and The Songs of the Auvergne which you can see on YouTube

Garageband piano roll was the musical notation I needed. I can see an orchestration in  the way traditional musicians can see it in the dots. 'September' Strauss which is one of the most dense orchestrations ever written was a revelation . I could see the structure with the bees humming and the rain softly falling and  as winter approached all life faded away until down to a single French horn.

So why isn't this type of notation taught to people like you and me? Because the Boards of Music are too set in their ways. Britten hated his music college and I thought mine was pretty hopeless too. I was fine on theory but would never have passed the sight singing. Fortunately I had many strings to my bow.

I now can orchestrate anything I wish and I do but I am like a prophet crying in the wilderness. Traditional musicians don't need it but singers who cannot read music do.

I suppose I should put this up on my blog. I think I wrote a similar piece a few years ago. So congratulations on behalf of all of us who have this problem and let people know there is still hope left. Learn to notate in Garageband. It is easy and free if you have a Mac or a midi programme.

You can see my efforts on my YouTube Channel - Janette Miller. All orchestrations are done in Garageband even the Mahler and Schoenberg and you can see me when I was 16 in the UK TV 'Turn of the Screw' and yet a traditional musician will still say I am unmusical because I do not read music.