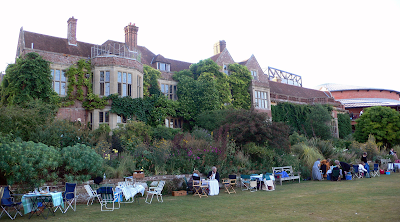 I love opera and have been going to The Royal Opera House since I was 9. I used to queue for tickets all the time I lived in London and could always get it but never to a Gala as I was not on the list. You had to on the list for getting Gala tickets. I did go to A Gala because I was in the ballet. The point is I could get in, to Covent Garden but Glyndebourne Opera? No never. Glyndebourne did not want the likes of me. Aldeburgh? Yes. Glyndebourne? No. "Not even for ready money" as Oscar Wilde put it so succinctly.

Now in the midst of the Corvid19 catastrophe for the Arts Glyndebourne needs me to make a donation by offering its productions online on YouTube for a month.

It is such a pity that with so much to offer Glyndebourne has been such a horrible place to visit. Every time I visit I am met with a feeling that Glyndebourne has to put up with me but would rather be left alone. I am not the type or class that is welcome at Glyndebourne. I am actually upper middle class in the scheme of things but with touches of Trade. I married on Oxford educated GP and even he was not good enough for Glyndebourne either He went to the opera once a week either ENA or Covent Garden but he too never got tickets for Glyndebourne.


The last time I visited was with an ancient aunt who was dying who lived in Brighton. I live in New Zealand and as she lived in Brighton she wanted to visit Glyndebourne but unfortunately had never been able to buy tickets. It seems she and I were not on the list of preferred customers and as she had never seen it so I drove her as a treat. It was out of season so I drove in at the gate so she could get a better look. The huge car park was empty.   As I stopped the car a well-dressed woman who was obviously someone in authority strode over to the car and tapped on the window. "Get out" she screamed in her very upper-class English voice. I timidly said that my aunt just wanted to see the opera house even from a distance. This was met with "Get out. We are not open! Go away! We are closed" So we did. We did feel like naughty children from the village who did not know our place. We certainly got the message that we were not wanted. I was so embarrassed that I had put my aunt in such a position. It was very hurtful and not necessary. I had tried to book tickets for many years with no luck. It was almost impossible to get tickets. You had to be on the list of approved. I was certainly not. The only time I went was by myself when I was given a ticket. It is rather a lonely place by oneself in the long interval with just an apple. The only time I bought tickets was when the box office made a mistake and advertised for one day only that tickets were available from the Glyndebourne office so I dropped everything and went down to book. It is a long 54-mile drive from London. When I got there the box office was not open and I was greeted with horror but as it was advertised they had to sell me two tickets as it is the law. The ad was changed the next day to keep the riff-raff out.  I now live in Auckland so going to Glyndebourne is out of the question. Now with the larger house and more tickets to sell, I hope they are more welcoming. This production looks rather good but it is only because of a catastrophe at the end of my life that I am allowed to see one. Now it sadly seems that Glyndebourne is willing to accept my money that it has rejected for most of my life.