Bill O'Reilly Christianity Is Not A Religion! 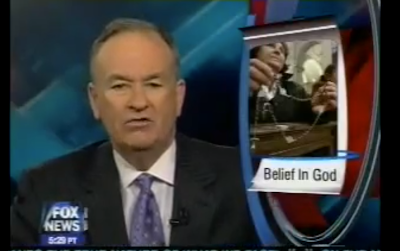 "Christianity is not an organized religion that can be imposed.  I do not know if Jesus existed. You do not have to believe in Jesus to admire his philosophy."

According to O'Reilly the Roman Catholic Church is a religion based on the philosophy of Jesus and came centuries after Jesus lived, if he did. I feel sure the Pope will  be delighted to learn that his one and only true church is just a sect based on this philosophy.

Then O'Reilly had a four minute rant about what to call a traditional Christmas tree. He did have a point because the Xmas tree is a pagan tradition but who cares what it is called.

I am listening now to a repeat right now. O'Reilly never lets his guests  speak and as my father used to say he just opens his mouth and lets his tummy rumble.

So as Bill O'Reilly is infallible Christianity is no longer a religion folks. What a hoot! I do love Fox TV. When there is nothing to watch Fox TV is great entertainment. 'Tide goes in, Tide goes out' and O'Reilly has no idea how this works scientifically and is proud of it. All he knows is God did it! Where does one start?