R.I.P Platitude Of The Day the complete answer to Thought for The Day 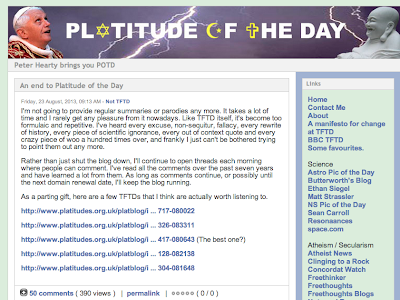 Sadly Platitude of The Day  is at an end. After seven years of providing an alternative version to BBC's Radio's  Thought for the Day a daily four minute puff for Belief Systems with no right of reply allowed ever the Rev. Peter Hearty has hung up his dog collar.

I must admit I saw it coming as the Rev. missed the monthly Clemmie Award for the most platitudinous item that month, nevertheless when it happened this morning I was shocked. No more POTD! I feel devastated. It is like a death in the family.

I only discovered Peter Hearty a couple of years ago. I have never been able to understand sermons although I have heard thousands. I get lost. I really tried to keep up with the priest/preacher/whoever but always lost them half way through so it was with delight that I read the wit and brilliance of Peter Hearty who cut through the waffle and showed the contents up for the rubbish that it is.

I used to perform in satirical revues in London in the 1970's and I know just how hard it is to write satire. Oh if only we had had Peter Hearty and ditched the Lord Chamberlain who used to censor each sketch. I have so enjoyed waking each morning to Peter's contribution. He should be working for the BBC.

Everyone who knows me knows that I am not a fan of Belief Systems. I experienced three different varieties of the Abrahamic religion and these actually ruined my education, (I didn't get one) and gave me nightmares and guilt complexes from which I have never truly recovered. I feel guilty writing this!

Peter Hearty is able to cut through the humbug in a funny, witty and acceptable way. He was nominated for Secularist of the Year by the National Secular Society and I think should have won and still ought to be a winner for his contribution to common sense. As long as the BBC and The House of Lords allows these faith systems to go unchallenged the masses will never learn reality. I mean if it is good enough for the BBC to believe in fairies it must be true.  Well perhaps not!

I did ask if Peter would write me another script about Adam & Eve but he never obliged but you never know he might now!

So thank you Peter and all your fans. I really, really shall miss you.  I shall  miss Dinah especially who is just so sensible and educated. Oh to have had Dinah as a friend! Matt I shall miss you too and everybody else. End of an era.

A few weeks ago I might have demurred from adding this video but hey, with the NSA and the UK version it is not possible to expect privacy anymore.

Just checked  back and it seems that the site will be kept up for daily comments and the Rev has promised us the best Worst Platitude next Sunday!

Labels: BBC Radio 4, Peter Hearty, Platitude of the Day. Thought for the Day