Stage Fright and me - Janette Miller 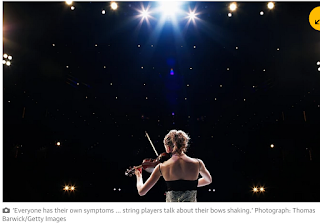 Soloists at the Proms perform in front of a live audience of 6,000 people and thousands more on radio,TV and online. How do musicians deal with nerves when playing to large audiences in public. UK Guardian.


I have always suffered from stage fright I didn't always but three performances early in my career were so traumatic that  all joy in live performance turned to terror. I was asked to take on tasks which would have daunted the most mature and experienced performer with no help and little understanding. It is amazing I survived. At 16 after the opera  The Turn of the Screw on Associated Rediffusion TV in 1959 which we did live was my third really horrifying experience that coloured the rest of my life.  A camera went wrong in performance I vowed never to do anything like this again.

Having worked in the live theatre and on live television, for in my day everything went out live, I think and still think the amount of preparation and understanding that a performer is given by the management has a lot to do with the nerves. Regretfully, the fact is, that most of the time performers are thrown on with little preparation and expected to give a first rate, perfect performance. Some of the lucky ones can insist on adequate rehearsal but most of us are not given this luxury.

For most of my performing life my success came from the ability to take over lead roles on the shortest of notice and do it better than the original performer with little or no rehearsal. Doing this is terrifying. Going on with no rehearsal when the original artist had at least 6 weeks is enough to give anyone stagefright. Doing this in the West End is frankly terrifying. Once had to take over major role in four days but circumstances cut this down to one and a half days most of which was taken on by costume fittings. One morning run through and on that night. Anyone would be scared. One was just expected to do it. This was not necessary as the previous artists could have stayed on for a couple of days to give me the opportunity to learn the role properly but due to personal circumstances she was forced to leave. No consideration was given to the fact I had just 48 hours to take over. One run through and I was on.

I remember I had to wait till the performance that night as no time to go home, the management was so mean that they shut the theatre in the afternoon to save electricity  so I took myself off to the cinema to get my mind off it. Nobody really helped.  The wait in the dressing room was unbearable and I just didn't want to do it and then the orchestra began and I made myself go on. I can remember being terrified all through the performance and when it got to the end I just sat down on the stage exhausted and cried. I felt I had done it so badly. The whole cast just stood and applauded but I was desolated. I knew I had to do the whole thing again the next day and I just didn't want to do it. It appears I stole the show but that was little consolation at that moment. Nobody should be asked to do this without help and it was unnecessary.

Artists need help and understanding, especially singers. Union rules mean that singers get little chance to rehearse with full orchestras, usually just one sitz probe and the a full dress rehearsal which is rushed because orchestra's overtime is prohibitive. The BBC Proms is possibly like this so it is understandable that you need a very special type of personality to be able to cope.

I can do it. I have had to but I hate it and now I am so pleased I do not have to do it anymore. But I was forced to perform by circumstances. I was good at it. The fear of performing live has never really left me that is why I became an director. I never asked any artist to do what I could not do myself.

Some artists really enjoy performing but those are the ones who have adequate rehearsal time and help from management. Some artists take it in their all stride and enjoy the performance and feel free to give their best. These are few and far between and I envy their confidence. Ballet dancers are taught not to be nervous and have years of training and adequate rehearsal even if they have to take over quickly as they know the work.  Others are better in rehearsal than performance. Nerves gets the better of them and they never perform to their full potential which is such a pity.

Today I still sing but only record and with the technology available I can at last have full control of my performance which I never did. I do find this type of performance satisfying. Now I like the way I sound and the way I sing because I have the freedom and time to do it and I am not thrown on.
Posted by Janette at 9:24 AM