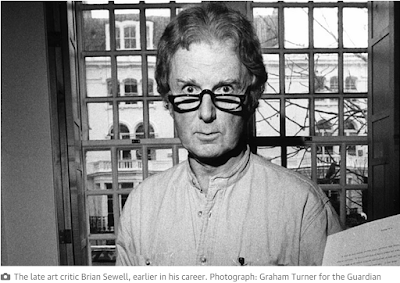 “There has never been a first-rank woman artist. Only men are capable of aesthetic greatness. Women make up 50% or more of classes at art school. Yet they fade away in their late 20s or 30s. Maybe it’s something to do with bearing children.” Guardian


The above quote is taken from the UK Guardian obituary for the art critic Brian Sewell. (pronounced Theweul). He was a one off, a character who had the most witty and cruel repartee that was administered with a spoonful of sugar that no one could take offence. It was almost an honour to be criticised by him unlike Bernard Levin, the theatre critic in the 1960s who was generally hated.

Sewell is so witty and sharp as a razor that I can almost forgive him for being a misogynist. Almost but not quite.

Like Sewell my mother at the age of 9 took me to The National Gallery to look at art and when I got home I announced to my Major in British Army father that I should like to be a fine artist like Rembrandt.

To this day I can still recall his answer. He said, Look at history, there has never been a great woman painter. Women are not great  painters! I became a ballet dancer. In my day women were the best at that.

But  my father was wrong. Women were not great painters because they were not given a chance. Michael Angelo would not have done a thing if he had been a woman. Time will tell but the world of art is still biased against women.

Still Sewell will be missed. He had a delicious and amusing way of being horrid that sort of appeals to the worst in us. We are all so glad it was not us at the end of his very acidic pen.