Britten, Sexuality and The Turn of the Screw - Janette Miller 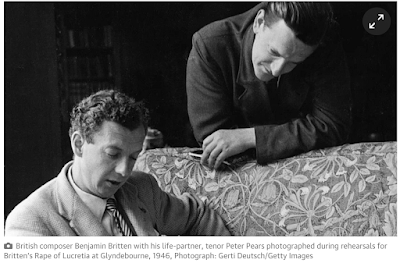 Queer pitch: Is there such a thing?

Does a composer's sexual identity influence their music?

Rolf Hind examines what it means to be a queer composer. UK Guardian

Nice picture of Britten and Pears to illustrate the article by Rolf Hind but nowhere does Britten appear in the actual text itself. Britten was an enigma. Britten never came out during his lifetime and would have sued anyone who said he was gay.

Many of his friends and colleagues who knew him well, Graham, Reiss, Duncan, Katherine Mitchell and myself consider Britten to be bisexual. He was confused about his sexuality all his life and could never choose. Pears, Auden and others chose for him and Britten was always a good little boy.

It is only now that I am approaching the end of my life that I feel I must write for posterity what I have known for years. Humphrey Carpenter, Britten's official biographer, told me that I had to do this.  I was to write down everything. He was going to do this for me but he died before it was published. I have his letters.

Because Britten was stuck for a young Flora I got to know him very well. He liked me and  I liked him. I was 19 and it was allowed. Britten admired me and I  admired him.  Britten went out of his way to get to know me. Nobody noticed at Aldeburgh. It was as if I didn't exist until one night Peter Pears noticed and after that it was difficult but not impossible to be alone with Britten as Pears was  always there! But that is another story.

In Britten's masterpiece, The Turn of the Screw Britten explores the theme of the choice of sexuality with considerable insight. It is as if Britten were Miles who cannot choose between the heterosexual love of The Governess or the homosexual love of Peter Quint both of whom Miles loved and at the same time hated to hurt in any way. At the end being forced to make the choice kills him. Britten never did make the choice himself. That is why this work is so compelling on all levels.

Never has the music of a homosexual lover sounded so enticing as the music Britten writes for Quint when wooing Miles and never has Britten written such beautiful arias as he did for The Governess in The Tower and Letter scenes. The song Malo he wrote for Miles too poignantly illustrates the dilemma Miles/Britten finds himself in when forced to choose.

The drama of this opera is mirrored in the cast. Britten loved  Peter Pears/Quint but he also loved Miles/David Hemmings and he loved The Governess/Jennifer Vyvyan. Little importance is given to this remarkable woman in Britten's life but she had a hand in the completion of The Screw. It was at her suggestion that Britten ended the opera with Miles's song Malo. She told me.

How do I know this? In later years I played Flora. Flora is the forgotten character of The Screw but just as important as the other three. She is bisexual if the ghosts are real. Flora is loved by both Quint and Miss Jessel. James in his novella is at pains to point this out. The difference is Flora accepts the situation and gets on with life. Miles was never able to do this and it kills him. Britten admired Flora. The music he gave her to sing is adult and difficult, too difficult for the child. It needs someone special and Britten knew I was special.

The interesting deviation from the plot was in the novella when the great confrontation with Quint comes and The Governess forces Miles to say his name, in the book Miles shouts Peter Quint you devil and then adds the word Where? Britten deliberately left this word out.  In fact, in the opera, it could be said that Miles may have chosen The Governess. The Earl of Harewood noticed this too and confronted Britten about it as to whether the ghosts were real. Britten is said to have said One must take a stand! What the stand was we shall never know. Years later as I corresponded with Pears. I like him too, and asked him often Pears would never reply.

Did Britten really love Pears? We shall never know. They had their rough patches in their relationship. When I was at Aldeburgh was one of them. Never once did Britten cast Pears as a lover. When a nice heroic part, like Mr Noye, came up Britten gave it to someone else. The rest are murderers, child molesters, rapists, tyrants and simpletons.

So it is right that Britten is not included in the article even though the omission is possibly accidental. Sadly Britten may never have known heterosexual love. The women he chose and I was one, were all remarkable and unattainable, I was too young and wise. As Lord Harewood told me I was lucky to come out unscathed but Britten was always the perfect English gentleman and years later I married a Miles very like Mr Britten so who knows. The women are there and documented if you look and Pears was a jealous lover and guarded him well. The women, me too, all knew our place in the scheme of things. We were there but out of sight.

We were all exceptional. Believe me, I was exceptional! At the age of 19, I could have danced the lead role in Swan Lake and sung Erwartung. I had already won the Production Prize at the Guildhall School of Music & Drama and I disliked Puccini and Brahms! I knew most of Britten's music having attended one of the first performance of Gloriana at Covent Garden in 1953. I also like fast sports cars and Gaudia Bretska. I gave way to Galina Vysnevskya, the Russian Opera star and wife of Rostropovitch the cellist. When Britten visited Russia for Christmas it was not Rostropovitch that Britten went to see.

In The Turn of the Screw  Britten says it all about his sexuality if you care to look. I should get a PhD for this!