The Damnation of Faust at the Met 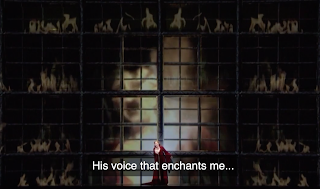 I have been privileged to see two fantastic productions of Berlioz's Damnation of Faust, the first at the ENO in 1969  by Michael Geliot, I went three times. It was said to be better and more spectacular than the coronation and this Met production by Robert Lepage which is in the same vein, a multi-media extravaganza.

This opera was said to be unproducible in Berlioz's day. It was a century before its time. Both productions lean heavily on dance, the former was choreographed by John Broome who did the choreography for my first West End musical "Stop the World I want to Get off", I wish I had known he had done this. At the time I was not only in the musical I was the ballet mistress and tidied up the production every Thursday morning. I would have happily continued as the ballet mistress but it appeared I was too valuable as a performer. Evidently, I had "IT"! I wanted to produce opera not appear in "Lilac Time"!

I love the use of live TV behind the singer and I had the opportunity to do "Tristan" I should use this technique so the audience gets up close to the action.

The only problem at the Met on the transmission is getting the ensemble together. Berlioz was clever as a lot of the work is in unison so it is acceptable but when the parts separate it is unfortunate. Musicals get around this by wiring each artist for sound so they can hear themselves sing. Opera singers need to be able to hear themselves sing otherwise they can't and end up yelling which is most unpleasant and not their fault. Too many gorgeous voice are ruined in the hopeless attempt of getting over an orchestra and singers quickly develop large wobbles. Too many choruses are out of time and tune as the distance is too large. This production avoids this pitfall by having the chorus strung out downstage by the audience.

These past four weeks have been one feast of opera. Almost an opera a day and a superb example of the art at that. Without this virus, I should never have been able to see these fabulous works as I am too far away and even in NZ expensive. It is hard to recall them all but if I have to the one that was most striking was the "Tristan & Isolde" set in a submarine, very powerful, and surprisingly the two Fausts, very different and both "powerful".