The Mona Lisa De-varnished and what a computer can reveal, 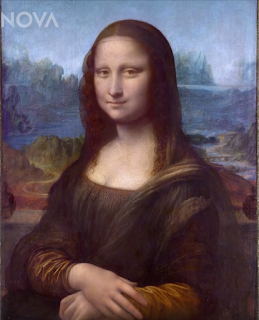 This engineer is using powerful lights, cameras, and computer software to digitally remove the varnish from the "Mona Lisa," allowing people today to see the painting as da Vinci once did.
Stream "Decoding da Vinci" online now to learn more: https://to.pbs.org/2Qu7htX


I had an IT experience of this type quite recently at The Auckland Art Gallery. It is truly astonishing what scanning and IT can tell you about a work of art but not everything. In real life one never knows exactly what is going to happen.
In 1982 I commissioned two designs for "Fidelio" from the then destitute artist Tony Fomison. In NZ I owned the copyright. As oil paintings dry so slowly I had to leave them with the artist and as I was busy I never gave them another thought. He said he would look after them and I never saw them again until I walked into the Auckland Art Gallery 37 years later when I thought I recognised "Fidelio Act 2" only it did not look quite right.
Four years and an expensive court case for both parties established legally that I owned the copyright. Naturally, I thought the Art Gallery held my original and as I am 77 I asked at the settlement meeting if I could see it again as my recollection of the original and the slides that were used in the production looked very different but time has a way of altering colours and tints and one's mind plays tricks. It was agreed that I would be allowed a final look at the Galleries convenience.
After the settlement, the Art Gallery behaved in an exemplary manner and five months later this February 2020 a viewing was arranged. I had not been given access to the painting during the court case. Viewing the Art Gallery's painting was a shock to us all. It was in fact very different from the original and it was not time that had made the changes. My original was blue and light beige/pink, the one on view was yellow and white. Pure white!
What had happened? Well, we just don't know. Fomison was famous for reworking his artworks sometimes to destruction and this may have happened here as the underpainting revealed a ghost which was not there in my original copy. Separations for printing on Photoshop can show these as the Art Gallery's revealed. The original "Fidelio" had no ghost and was painted on board, not canvas as with the copy. The ghost is almost thumbing its nose at us and laughing at how much angst the artist's actions had caused.
Unfortunately, the Art Gallery and the BNZ, who holds what was thought to be "Fidelio Act 1", both have an unauthorised copy which the artist quietly sold on without my knowledge or permission in 1983 as originals and neither organisation holds the copyright. Still, as the price paid was just a few hundred of dollars and not the hundreds of thousand dollars the originals would be worth if genuine the galleries have not made a huge financial loss but both now have worthless copies that cannot be shown without a copyright licence till fifty years after my death.
It shows that proof of provenance is everything in buying art. Fomison was wise enough not to sign these works and sold them as is through an agent. Be warned art buyers, never buy an original artwork without a formal written transfer of ownership and guarantee from the artist.
Did Fomison cut up my original and paste it on to an old canvas? We don't know. Is my original underneath? I had hoped this would show up but it didn't.
But it was a practical lesson into what this type of technology can and can't do. It can clean up the Mona Lisa but it cannot tell reliably what is underneath unless each layer is dry first before being repainted as with the ghost who won't go away.
I am hoping when this virus is over to have "Fidelio Act 2" made into a mural on a wall somewhere in NZ which I think Fomison would have enjoyed. It was the mural he never painted on a wall. It is very beautiful and a vision of hope for the future which is so needed at this moment.