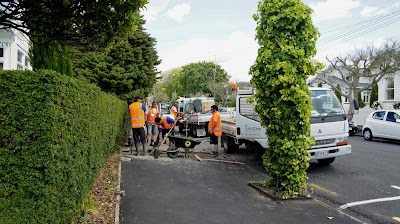 This blog will really only be of interest to Auckland gardeners. This year Auckland carved off water from our rates and put us all in the hands of Watercare to deal with all users of water in Auckland and that means all of us.

From two bills per year we now have one a month and the cost of water seems to have escalated. One of my six month bills was for $72 now it seems I have to pay $30 per month! A big increase. My summer watering bill used to be $200 now I dread to think what it will be in future if my winter bill doubled at the same rate. It seems now we all have to pay for waste water as well.

I wrote to Watercare and complained. I complained about the huge waste water charges, the monthly fee and the fact that most of the water I use goes on my garden and as the water goes into the ground I objected to having to pay again to have it treated.

I had to wait but they wrote back a very sensible email which explained the changes better than all the PR had done up until now. It seems the monthly charges and the waste water were included in the rates and cost approximately $600 per year. Householders are allowed a 20% allowance for things like washing the car an gentle watering,

They were sorry that I was going to have to pay more for water that did not go down the sewer but had I considered an irrigation meter!!!! The irrigation meter was a revelation. This is a special meter that is wait for it, used for irrigation and you do not pay waste water charges!!! It has a catch that the 20% discount has to be forsaken and it is initially expensive to install. You can say that again!

I was shocked at the cost $1,500 because an irrigation meter needs a back flow valve. I had not heard of a back flow valve and neither had anyone at Watercare. Even though I am mature, well old, and at the end of my life I thought it was worth it. In about one year it will have paid for itself so I ordered one complaining bitterly about the cost.

However when I saw what and how many men were involved and the size of the valve I am amazed the installation was so cheap. It took five men about three hours and included a huge truck, a gas man, a box about the size of half a coffin plus council permission as the thing takes up half the pavement and a half road close plus a man to repair the pavement the following day. The valve is necessary to avoid accidental flow back into drinking water. Very sensible.

The work men were a delight and one plumber later to connect it up my side my garden can look forward to a drink which will not break the bank and I can hose the paths, car and house without having a fit.

This meter is a well kept secret even the plumber had not heard of it so many thanks Watercare for letting me in on it. If you have a garden go for it!