The power of the USA Gun Lobby 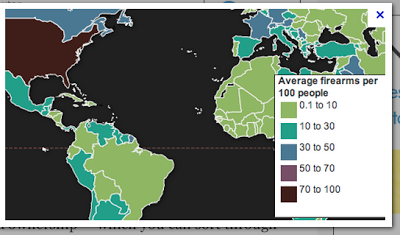 One has to take one's hat off to the National Rifle Association of the USA. First its reaction to the massacre of Newtown is to immediately say that now is not the moment to discuss gun control and then two days later to bombard the media with its answer to the problem, not less guns, but more guns. Arm school teachers, have armed guards in school that's the answer.

It is people that are the problem not the fact that anyone can go out and buy a semi automatic gun that can kill 30 people in three minutes!

70% of the population of the USA owns a gun! That is scary. The USA citizen seems to have no idea of just how outrageous this is. There are 300 million guns in the USA. That is more than the population.

The gun lobby has now centered in on the mental health system. That is what needs to be fixed. That is going to get public support not the public gun toting citizen who just likes the power of carrying a gadget that can kill. One Gun lobby representative was very vocal on the BBC World Have Your Say and propounded on more than one occasion that it was perfectly acceptable to lose up to two pupils by giving teachers guns if 18 could be saved! I hope he is proud of himself.

It is stunning just how strong this nasty, powerful gun lobby is. Even Obama dare not criticize it even under these circumstances. Nothing is going to change. The USA citizen likes having a gun and that is his right and in a few months this sort of killing will happen again and again and again.

Here in New Zealand it is illegal to have a gun. Our police force do not carry guns. The only place you see a gun in Auckland is outside the USA consulate. We have the occasional armed robbery, usually a sawn off shotgun but no massacres where 20 children and six adults are killed within three minutes.

Where there are guns, any guns, there is violence. Thank goodness I never have to go to the USA again. Too dangerous. Thank goodness I live in a sane country. No nuclear weapons or power and no guns for the general population.
Posted by Janette at 1:25 PM