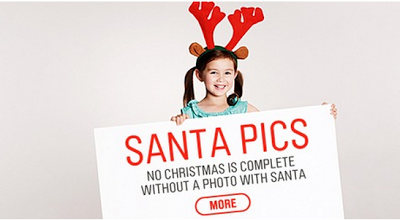 Westfield Shopping Malls are so right. No Christmas is complete without a photo of the kids in front of either Santa, a Nativity scene or a Christmas tree. Photos of kids at Christmas give everyone so much pleasure.

The wait to see Santa in the Mall. The first experience of having to sit on a strange man in a red suit and a beard's knee and tell him what you want for Christmas with a loving Mum and Dad in tow and a photo to prove it.

Then there is the photo in front of a nativity scene. More young children are introduced to the joys of Christianity by seeing the baby Jesus in his manger than at any other time of the year. Being crucified in agony on a cross does not have the same appeal.

Then there is the tree. The fully decorated Xmas tree is a joy to behold for children of all ages. It is a dream. Oh if only life were like a Christmas tree. For grandparents who cannot be with their grand children photos at this time are so precious so it was with some dismay that an outing to Christmas Wonderland which is advertised as New Zealand's most spectacular Christmas tree trail, entrance fee $12 adult and $6 per child, $30 family of four which in this age of austerity is not cheap does not allow photography.

Every where you look is a sign saying "NO PHOTOGRAPHY ALLOWED". If you are in any doubt another well placed sign will reinforce the unfriendly message. It is like being in DisneyLand and being told that you cannot have your photo taken with Mickey Mouse. One is not even allowed to have a photo taken in front of the Nativity Scene. There for all to see is a big sign saying "NO PHOTOGRAPHY ALLOWED"! If I were Jesus I should be shocked after all he wanted everyone to come to him and had choirs of angels around to let everyone know. If the press had been around in his day it would have been summoned. Pity it wasn't as the Nativity was not well documented.

I can understand Don't Touch but not No Photos. As if the signs were not enough there were plenty of staff who even when asked nicely if it were possible to take a photo were empathic that it was not possible. When asked to explain why said the donors did not want it! Why donate if you do not want publicity. That is what you donate for. The Olympic Games is financed by donors who pay for the privilege of having exclusive rights for publicity.

This is Birkenhead, a small suburb of Auckland which is not actually on the world map for exclusive occasions.   So what harm can it do to let parents take a few snaps of their children to share with friends and family?

Whoever did the PR for this event needs to think again. The idea is to get as much publicity as you can if you want people through the doors. Word of mouth is essential. An enormous amount of effort and time has gone into this event and it is a pity to ruin it by being mean. Half the fun is having your photo taken in front of your favorite tree. In fact without this sort of activity children find it rather boring because if you are a child when you have seen one tree you have seen the lot. Children don't go in for detail and as some of the trees are rather tall they don't get to see the crowning glories as these are out of sight so choose your tree to have your photo taken is a great idea. That way they can run around and compare. No such luck.

The trail was impressive and you will have to take my word for it. I could have shown you just what you are missing  to encourage you to go but I am not allowed to do so. No Photography Allowed. The amount of work that has had to  be put in to make this event possible must have been staggering for a small suburb. It is part of the social history and unless properly documented will soon be forgotten. Not a mention on YouTube and they don't want it mentioned on Facebook! So donors you have all missed out. This lot do not want publicity. Perhaps next year before you donate you could ask the organizers to be a bit more generous and allow kids to be photographed in front of your tree.

It is amazing they got anyone there at all.

I had a word with one of the organizers this morning. She was extremely helpful and said that many had raised this no photographs issue. It seems that on the last Wonderland two years back too many photos meant that the trail was slowed down to less than snail's pace and the place got so hot people were fainting!

However they hope in two years time to have a place where photos can be taken safely.

If only one of their helpers had told me this I should not have complained!