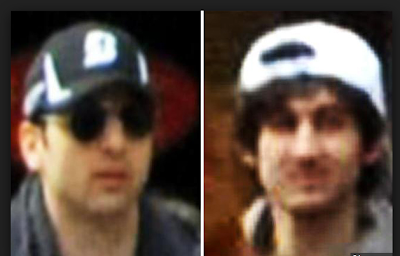 Yesterday the USA Congress voted down President Obama's moderate request that all gun sales should be subject to checks on the owners. The National Rifle Association which seems now to be just a powerful arm of the Ammunition and gun manufacturers won.

Today two young American men not only blew up innocent  spectators at the Boston Marathon, shot dead a policemen but held a full scale automatic gun battle that went on for at least a minute with many rounds being fired.

As yet no one has asked the question where did they buy the guns or why were they able to buy such guns that cause such mayhem? These horrifying events are not going to be isolated to incidents in schools.  Now it is open season on anyone unlucky enough to be in the sights of anyone with a grudge and an automatic rifle.

The NRA has allowed this to happen. I hope they are proud of their victory.

These two young men who should be grateful for the land that embraced them but instead they seek to destroy it. They  seem to be doing this in the name of their religion. They are engaged in a religious war in which Jews, Christians and Infidels  are to be killed and if the two young men are killed they will be martyrs and will enjoy the services of 72 virgins in heaven.

It has taken many hours after them being named that anyone has dared to mention that they are Muslims. It is the horrible union of the ease of obtaining guns and religion that has made it easy for these ordinary young men to kill in such a disturbing manner.
Posted by Janette at 9:43 AM