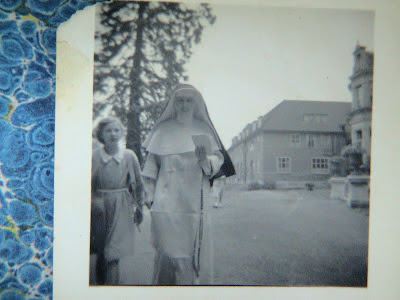 How could anyone believe in a Dwarf they couldn't see? And what is worse force a child to say she saw it when she know she didn't.

What makes people say they can see something that they know is not there? What makes people believe six impossible things before breakfast? Sister K. gave me a lesson in seeing and believing in imaginary beings that I shall never forget when she forced a class of 30 children including me to say we saw a bad tempered dwarf called Red Cap who we all knew wasn't there!

At least I attempted to say I did not see Red Cap but not one of my school friends had the courage to back me up as they were terrified. That was what our convent school excelled in terrifying kids. We are still all terrified and it is only in our 70's that one or two are beginning to speak up.

Standing on top of a desk for two and a half hours because I refused to acknowledge her imaginary friend made me think about God. I was pretty sure there wasn't one or if there was he was horrible as at the age four I had seem the images of the opening of Belsen on TV in 1947. I only had Sister's word that God existed as my family never mentioned him. I had been less than impressed and indeed disappointed when I was taken to see God for the first time at school when I was five because he obviously wasn't there. The strange thing was that everyone else there pretended that he was.

Being at an RC school one could not escape religion. It was there every hour of the day. We all knew about God and hell. The story of Adam and Eve and their fall from grace by their Original Sin was drummed into us from the age of five with a ferocity which I saw replicated by Sister K. when she introduced her second imaginary friend Red Cap.

To all those not familiar with the Abrahamic religions and cannot understand why Darwin, The Modern Scientific Theory of Evolution causes such mayhem it is because of Adam & Eve and the Sin! Adam and Eve are the most important people in the bible as without their Sin the rest is history. Unlike God who can do what he please Adam & Eve are REAL humans, not myths, and have to abide by the Laws of nature. A&E have to appear in our DNA, they are real humans. Get it? However every Jew, Christian and Muslim must believe in Adam & Eve as their belief system relies on it.  Each branch has its own take on how to get over they don't exist in human DNA but in the case of the Vatican it goes like this:

We are all related to Adam & Eve who were the first humans and so we all all guilty of their Original Sin by association. Because by blood we are directly related to this wicked couple, the woman being especially cursed, we must all suffer eternal damnation in the fires of hell unless we live a good Catholic life and stay free of mortal sin.

I think that puts it in a nutshell. Catholics still believe in this today along with many other improbable things, like transubstantiation and the Bodily Assumption of the Blessed Virgin Mary into heaven but belief in Adam & Eve is compulsory.

When I was young I had no way of proving that my school teachers were incorrect. They put their case with such fervent ferocity that it was impossible to refute. This went on for hours so that when our class was told to believe in an imaginary dwarf Red Cap they all did with the exception of me but in fact I don't think any of them did. They went along for the ride as it was safer.

I became very good at religion. It paid to be good at it otherwise one got punished. At the time there was no way to prove that Sister's imaginary friend  didn't exist and great care was taken never to mention Darwin and the Modern Theory of Evolution. I got 98% for my catechism test. I knew it backwards.

However I was still not really convinced. At 28 I read a Sociology  Book on Faith systems and became a non believer overnight. I still had not heard about Darwin. When I married my husband Dr Miles Heffernan, GP Oxford/St Mary's I did.

Today Science can prove without a shadow of doubt that  The First Humans, Adam & Eve, the most important beings in the bible, the couple to whom we are all related never existed. They never sinned. DNA proves this absolutely. Not only this but not one modern human is related to them even if they turned up which they won't.

Normally this revelation would make these religions shut up shop but they shout so loud that their God exists on the Radio, in newspapers even in government which take belief systems seriously that they get away with it. They even try to doctor school curriculum's to avoid teaching the truth so mislead their pupils. There is more links here to scientific subjects than I was ever offered at school.

There are many countries in the world where I should no longer be safe by just saying there is no Adam & Eve! I should be killed. To save my life I should be forced to say I believed although this could be proved in any court of law.

One way to stop this to give every child a secular education free from myth and superstition. Teach them about DNA and its implications. Show them that Adam & Eve of the bible could not have lived or sinned because their DNA does not show up in any of us and it should. If they lived the DNA evidence would be as clear as crystal. It isn't because they didn't exist.

Even when told this millions would not believe it.  I expect my school friends would never believe it. They cling to a superstition which in their hearts they know is wrong because they were taught it by people they thought they could trust. They would not trust me or DNA and so the world is harried by religious wars, overpopulation and cruelty to animals and women.

Today non-believers have the access to the media that was unheard off a few years ago but traditional media and governments still enjoy the power that a belief in any imaginary friend can offer so still push religion as if it were true. Each morning the BBC trots out Thought for the Day, a four minute puff for belief systems with no right of reply.  Platitude of the Day brilliantly written by Peter Hearty is the antidote for this nonsense. Oh I'd love to have four minutes on Adam & Eve!

Sister knew the power of her Imaginary Friend. I saw her in action. It was and still is terrifying. The irony is that her brilliant teaching of this myth gave me the knowledge to prove that she was wrong about her God because her God relies on two real humans Adam & Eve. Strangely I should still not be able to prove that she could not see Red Cap!

Sister K. would be surprised that the little girl she tormented in 1949 was able to tell the world about it in 2015. I always said if I found her I should write and tell her what damage she did to me but when I got the chance I found she was married with a dying partner. I could not bring myself to add to her sorrow. She had left her order and that says it all.