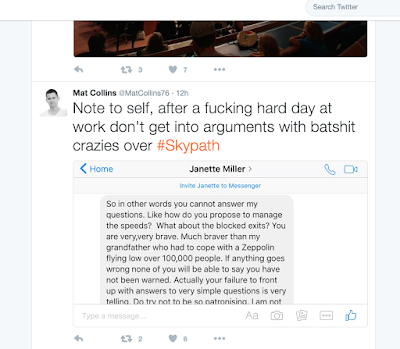 Not very private is seems as I found out to my cost this morning when a private  Facebook message I had written to Mat Collins of Auckland . He is so passionate about the proposed SkyPath shared path which I consider dangerous and he was so furious that I had questioned his judgment because I asked him a couple of questions in private that he should have been able to answer that in a fit of hate he published my private email not on FB but on Twitter where I am not a member so could not reply.

What I found totally unacceptable was that Mat Collins then made it impossible for me to reach him and get him to remove it and succeeded in having me banned from other sites.

Mat Collins did know about the privacy because his last remark to me was so unpleasant that I asked him if I could use it  as it was so telling. Obviously I cannot repeat it here because he has not given me his permission.

Mat Collins seems to think his actions are acceptable and a payback for something he perceives I did which as it happens he could not have been more totally mistaken and instead of writing or even phone me to check he goes out on a limb to teach an old Batshit Crazie  a lesson she will never forget.

So what to do next! Obviously a private message in Facebook is not a private message. This came as a shock but one I have to face. It means I can no longer ask questions in private as of norm because if the recipient feels  aggrieved as in the case of Mat Collins and is not aware of the rules of privacy your private message is revealed to the world and worse still you may never know it.

So what to do? To be adult about it, I was possibly naive in thinking that Mat Collins would be rational and I was right. I have learned a lesson  about private FB messages  - they are not private unless both sides agree so in future I shall never use them again to people whom I am unsure will not stick to the rules or if I must then anyone I don't know personally and trust, I did not know Mat Collins, then I shall state the rules up top as one does with a letter, i.e. In confidence or even better  In strictest confidence. That should do the trick.

Well Mat Collins has found himself the star attraction in my blog and he will possibly now face a three day FB stand down for his Tweet which I had not authorised.  It was a truly vicious thing to do and totally unnecessary but I must have hit the nail on the head.

Another tip before corresponding on any level with someone you do not know is to Google them then you have some idea of who you  are dealing with. I should have looked Mat Collins up before I FB private messaged him.  I didn't , so for the first part of the conversation I had no idea who he was, he could have been anyone and he did not help me except eventually to say he was a safety expert, at that point I looked him up. I realised my mistake. I should have looked him up sooner.

Yet he, an expert, finds it impossible to answer my simple questions

Why are the only two exits on SkyPath blocked by turnstiles when all safety regulations say these should be free of obstruction?

Mat Collins is positive SkyPath as designed is safe and that these problems will never occur and I am being a scaremonger.   I think he is a very brave man.

I did send him this video to refresh his memory. This too will be considered by SkyPath promoters scaremongering but I consider it evidence to I shall take the risk and show you. Nowadays uncomfortable videos seem to be the only way to get things done.

This unfortunate episode has taught me a lesson and hopefully this will teach Mat Collins a lesson and that he takes more care in future.  If you get a private FB message the sender may intend it to be private. If he had phoned up or answered in a sensible manner none of this would be necessary. An unpleasant business for all of us!  Sometimes Sorry is  a useful word.