SkyPath - Save Northcote Point - Give a Little - Janette Miller

The Mayor of Auckland Len Brown needs a legacy project for Auckland to remember him by. Let the citizens of Auckland and the World walk and bike across the Harbour Bridge.  Sounds a Dream. With all his power and Council funding SkyPath has passed its first hurdle with a Resource Consent giving SkyPath permission to go ahead.

There is only one snag that could ruin the party and it is a big snag -  SkyPath requires two major station hubs to funnel the visitors onto the SkyPath. The one at the Southern end can just about do it at a stretch but the other end SkyPath hits a snag - a snag that threatens the whole project only the mayor and cyclists are not going to let this get in their way. Build first and worry about it later! 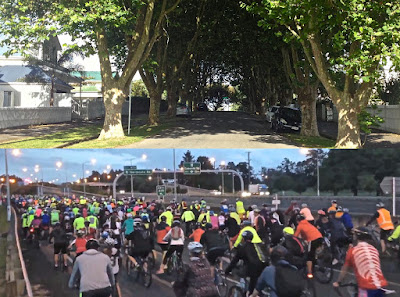 For many years Northcote Point  has been tiny sleepy, leafy cul-de-sac  situated on a narrow peninsula beside The Auckland Harbour Bridge where no one wanted to live. The houses were cheap and run down but gradually over the years Northcote Point has been lovingly restored and now It is one of the nicest places in the world to live and visit with its restaurants, arts cinema and the ferry. There is little parking and really nothing to do for visitors but is a pleasant way to spend a lazy afternoon.


SkyPath is a commercial  tourist venture which plans to offer tourists, cyclists and pedestrians the chance to cross The Auckland Harbour Bridge by means of a 1.2 k tunnel attached to the lower side of the Harbour Bridge. It is being  promoted as a tourist attraction to rival the London Eye Ferris Wheel and it needs to attract huge numbers of paying visitors to make it pay.

The numbers are huge! 20,000 visitors a day trips off the tongue but SkyPath with the help of Mayor Len Brown is determined no matter what the cost this project is going ahead and with his help the resource consent was granted.

The cycle lobby is jumping for joy as their dream of biking across the Bridge in huge numbers is about to come true. The Mayor, media, and bikers via Generation Zero have made sure the whole world is invited and ready to roll but the residents of Northcote Point who know that their area is not up to it is trying to put up a fight to stop the madness before it starts but with the whole panoply of the forces in favour against them it is a bit of a David and Goliath operation.

Northcote Point is tiny. 2,000 visitors an hour is too many as has been and 20,000 not possible. NZTA will be forced to open lanes on the Bridge if this number turns up to avoid disaster.

The terminal would need to be of a considerable size to host the crowds expected in safety and to ensure a pleasant experience. It is after all a tourist attraction. Vancouver's Canada Line Bridge which was given as an example shows the area that is needed and this Bridge is not a tourist attraction. It links two industrial areas.  It has hardly any patronage as the area is so isolated yet it has a vast empty area around the portal and can be evacuated easily.

Contrast the area available with that of Northcote Point.

The space available for this major traffic hub at Northcote Point, is about the size of two tennis courts if that  and it can never get any larger, and to make it worse there is only one road entrance as shown. It is a cul-de-sac. All 20,000 visitors will have to enter  or leave through one tiny 5 meter portal blocked by turnstiles while a similar number are coming off and arrive or leave by this road. Even if the Council bought all the houses in the area there still would not be enough room and it would be so unpleasant that no visitor would want to come.

SkyPath, the Resource Commissioners and the Council  Officers all swore that these numbers would make a minimal impact on this heritage area but all refuse to say how these crowds are to be managed. So far all that has been offered are two security officers with a CCTV camera based at Westhaven, 1.2 k away on the other side of the Bridge. It is up to the residents to work it out.

If the residents protest they are presented as Nimbies and vilified in the media as spoil sports. The NRA point of view is stifled by a cycle mad press and Auckland Transport Authority who believe that residents have to be sacrificed for the greater good and the residents will have to learn to live with it. The general public just thinks the residents are being difficult.


All the cards are in the Mayor's hands. Because SkyPath won the Resource Consent it is fully funded for the Environment Court Appeal by lawyers paid for by The Auckland City Council via the Ratepayers of Auckland. Only in the Resource Court can ordinary people speak for themselves. Once it goes to a real court expensive lawyers are required.

I do not belong to the Northcote Point Residents Association.I live on The Point and I do support the Give a Little appeal.  They deserve every bit of help they can get to fight against this hasty Resource Consent. Even a few dollars will help! It is worth it to save this beautiful Point for posterity or at least to get the problems sorted out before SkyPath goes ahead.

This video was made for the Mediation Court that was held before the Environment Court Case begins. As an individual I could not afford to join this case. The Safety issues will not be not part of the Court Case. I made this video as visual evidence to show just how much space 2,000 cyclists take up. Bikes take more room than people. A picture is worth a 1,000 words but a moving picture really gives the true story. Like it or not this is what 2,000 cyclists look like.

Yes they did start together  but there were never 2,000 cyclists on the Bridge at one time for  by the time the cyclists got there the crowds had evened out. In the opening close up there are just 15 cyclists in mid shot.  SkyPath intends to have 2,000 of Shared Path traffic both ways at anyone time. The path is just 4 meters wide with only two blocked egresses. One at each end.

The figures quoted are all taken from The Auckland City Research pdf for SkyPath 2014  pdf. These are the figures that were presented to the commissioners.  The figures were placed under oath in Court and so have to be believed. The figures are not made up.


Please help to to save Northcote Point.